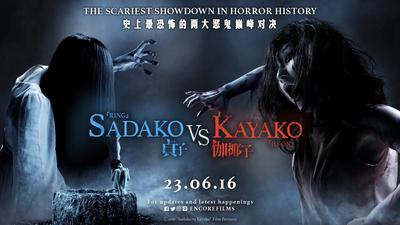 Cast: Mizuki Yamamoto, Tina Tamashiro, Masanobu Ando, Runa Endo, Elly Nanami, Rintaro Shibamoto
Date Released: June 18, 2016
Synopsis by Wuxiarocks: Yuri (Mizuki Yamamoto) buys an old VCR machine and finds a mysterious tape. When she plays the tape, a deadly curse inflicts itself on her. To get rid of the curse, she must race against time to find an even deadlier curse to counter it. It’s curse vs curse. Can she get out of this alive?

The film opens like any other Horror films, some poor soul gets into a creepy situation.

The first thing she finds is a dead face house owner.

Instead of running away, this lady stays for a movie. (Terrible idea.)

Somewhere in Japan there’s a cool University where this professor lectures ghost and curses. (How cool is this class?)

Meet our two best friends, Yuri (Mizuki Yamamoto) to the right, and Natsumi (Aimi Satsukawa) to the left. (They clearly love this class.)

After class, Natsumi begs Yuri to buy her a VCR machine so she can watch some old wedding tape. Yuri agrees in exchange for food.

Meet Suzuka, (Tina Tamashiro) our next lead. Who moves into a new home with her parents.

Right next to their new home is an old curse haunted house. (Check your neighbors before moving in.)

Yuri finds hair in her palm. (The price for buying junk.)

After they set the machine up at home, they find an old tape inside. (The smart thing to do is to not watch the tape.)

They watch the tape. (These kids I tell you.)

That time when your friend ask to watch a movie but plays on their phone instead.

Yuri can’t see Ring lady, cause she didn’t watch the tape. Natsumi however is done for. (The size of that VCR machine though.)

At the junk store, this employee tells her boss she sold an old VCR with a deadly curse tape to a customer. (Worse employee of the month.)

Of course this random employee watch the tape 2 days prior, so her time is up. (You can’t fire me, I quit!)

Suzuka wakes up in the middle of the night with a nightmare. (This happens when you live next to a curse haunted house.)

The next day Suzuka’s classmate gives an exposition about the curse house. (Man killed his wife and son before hanging himself.)

Back at the junk store, our lovely customers want their money back.

They tell the shop owner about the curse tape.

The owner lady tells them this curse tape took an employee life recently. (No money back for you!)

Yuri and Natsumi takes the tape to their professor. (Who would you give a curse tape to if not your teacher?)

The professor loves the tape so much, he burns a copy to DVD. (Probably gonna sell it on eBay later.)

To save their lives, the professor takes his students to see a Psychic-ish lady? (Soul Society represent.)

Psychic lady pours a bucket of water down Natsumi’s throat.

Psychic lady gets possess by Ring lady. (As if she wasn’t crazy looking before.)

She headbutt the Professor and turns his face into a fortune cookie.

Yuri gives Natsumi the tape and ask her to hand the tape back to her. By doing this, the curse is suppose to transfer over. (In theory.)

Yuri takes one for the team and watch the tape.

To anyone reading this, I shall pass the curse to you. (Stare at it.)

The telephone call of death rings. (In two days, you will die.)

This mysterious stranger walks in and takes the phone from Yuri. (I signed up for Battle Royale girl, I fear nothing.)

Keizo (Masanobu Ando) ain’t afraid of no ghost. He destroys the phone. (When someone calls to threaten you, this is how you act.)

There’s an old well behind the old house. How convenient.

Meanwhile, back to Suzuka. Anyone remember Suzuka? Yea, that girl no one cares about who moved in next to the haunted house. While having dinner with her parents they discuss about a group of kids who went missing recently. They were last seen in front of the creepy old house.

Back to Yuri, her friend Natsumi confess to her about doing something dumb.

Natsumi rips the curse tape from the DVD the Professor made and upload it online. (I knew those videos on Youtube were real!)

Yuri demands an explanation and Natsumi tells her if she’s gonna die, she might as well take everyone along. (How rude.)

Natsumi attempts to hang herself, but Ring lady stops her. (She wants to do the honor.)

Ring lady feeds Natsumi a lock of hair for dinner.

Back to Suzuka, she think those missing kids are hiding in the haunted house.

Our haunted house resident boy greets her with open mouth.

Suzuka’s parents hear her scream and storm into the house.

Ghost boy Toshio (Rintaro Shibamoto) jumps on daddy’s back and gives him a neck stretch.

Suzuka wakes up the next morning and see these strange people.

Keizo tells Yuri and Suzuka in order to break their curses, they must go in the haunted house. Ring lady don’t like it when others get in the way. If Grudge lady tries to kill them, Ring lady will fight Grudge lady. (Fight poison with poison!)

Yuri and Suzuka gets two seconds to know each other. (Nice meeting you, let’s go die.)

The promise night arrives. Yuri and Suzuka enters the Grudge lady house and kicks back for an all girl movie night.

Toshio looks up their skirt and enjoys the view.

Ring lady whips out her hair and pulls the creepy ghost boy into the TV.

Grudge lady crawls down the stairs and be like, “Who’s the ugly woman in my house!”

Ring lady comes out of the TV and be like, “I live in a well but I have better hair than you!”

The two ghost ladies of J-horror icon battles it out. (By battle I mean pulling each other’s hair.)

Yuri and Suzuka runs out and meet Keizo in the back. He explains his plan to seal Ring lady and Grudge lady. But someone needs to be sacrifice. He will need a host body to seal these two demons in so he can destroy them.

Between Yuri and Suzuka, who will be the sacrifice? I’m not telling.

They crawl and tip-toe at each other towards our heroine. She leads them both down the well in her tragic fall.

The lid is cover. The two curses is seal.

We have a winner! Who is this?

Sorry readers, this is a pretty cool twist, so I won’t spoil it.

Here’s my overall thoughts on the movie. It’s not bad. However it’s not great either. As a horror movie it’s fine. It works as a Ring movie, but a Grudge movie, not so much. This is first and mostly a Ring movie. As you may have noticed. The movie even opens with The Ring curse incident. Though it did try to give nods to The Grudge by having a caretaker visit an elderly home. I’ll give them credit for that. Still, it’s mostly a Ring movie.

The film is titled Sadako vs. Kayako, so it should be about the fight right? Nope. The fight only lasted 30 seconds. It’s not much of a fight. This is probably the most disappointing aspect of the movie. I expected the two ladies to rip each others skin and throw each other around by the hair. It didn’t happen. Instead we get a few glimpse of them pushing each other and that’s it. Kinda like those fights in school where nothing happens.

The fight should be the main attraction. Sadly, it’s a miss opportunity.

At the end of the day, I guess this is a marriage of franchise more than a fight. Two beloved J-Horror icons coming together. The biggest take away is the neat twist at the end. It pretty much kills both franchise. In a very interesting way.

I look forward to what comes out of this in the future.

Hope you enjoy my review! Thanks for reading!

This is WuxiaRocks, flying out.