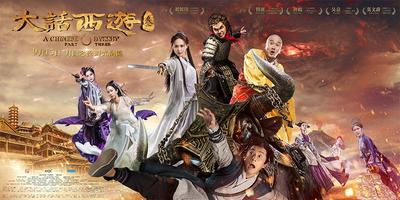 After two decades, the third chapter to the cult Fantasy/Comedy A Chinese Odyssey I & II is finally here. A Chinese Odyssey Part Three is the continuation no one asked for, but director Jeffrey Lau figure if audiences dig it in the 90s, why not bring it back. With all new cast playing characters of old, how is the results? Let’s find out!

Oh, I’m WuxiaRocks! This is my first post here on AVV. Now onto the review.

Chinese Title: 大话西游3
Cast: Han Geng, Tiffany Tang Yan, Wu Jing, Karen Mok, Gillian Chung
Date Released: September 15, 2016
Synopsis by Wuxiarocks: To change her fate, Zixia (Tiffany Tang Yan) use the Moonlight Box to travel back in time to break up with her lover Joker (Han Geng) in an attempt to prevent her future death. But when Joker refuses to break up with her, she decides to become the lover of the Bull King (Zhang Chao) to get rid of Joker. Not willing to let go, Joker confronts the Bull King. Zixia must then decide between the one she loves or the fate that binds her.

In traditional Fantasy fashion, the film opens with a convoluted narration that goes through one ear out the other. Something about life and pre-written destiny. Free will? What’s that?

Zixia (Tiffany Tang Yan) dies for the sake of love.

The Monkey King fails to save her. (He might as well be watching horses.)

Plot twist! Another Zixia appears. She’s a time traveler from the past. By witnessing her tragic end, Zixia hope to change this outcome. With the magical Moonlight Box in her hand, she activate its power and return to the present.

The first thing she do when she returns, she breaks up with Joker. (Han Geng) Believing that by leaving him, she can avoid her destiny. Because she knows he’s the Monkey King.

She dives into his heart (literally) and feels the love. But she must do what she must.

Zixia argue her problems with her sister, who is a shadow of herself.

She takes Joker to cameo town. (Seriously, this place exist for cameos.)

Zixia finds Jing-Jing (Karen Mok) reprising her role. Zixia wants Karen to seduce Joker so she can leave him.

Karen is trigger by this and throws a Kamehameha of knives.

Suddenly we are outside with Umbrella lady. (Gillian Chung)

She steps on her donkey head to launch herself. (Animal was harm in the making of this.)

Gillian comes to save Karen from sloppy editing.

After defeating them, Zixia introduces Joker to the two ladies. But Joker only has eyes for Zixia.

Zixia runs away again! This time instead of giving her boy away, she’s giving herself to Bull King. (Logic)

While searching for Zixia, Joker encounters Guanyin, who is fighting the Monkey King. (What?)

Guanyin flicks a drop of awesome sauce and summons a cool ice dragon, straight from Hitsugaya of Bleach. This is probably the best CGI battle scene in the whole movie.

Monkey King get taken to heaven.

Note: Apologize if I’m mixing up any of the plot here, this movie is super confusing.

So after Monkey King is gone, the Longevity Monk turns to Joker as an Avatar.

Then Bull King (Zhang Chao) appears randomly and invites Joker to his place to show off his new wife.

Of course Bull King first wife Princess Iron Fan (Nan Xie) shows up. Along with her Red (Hair) Boy. (Yibo Wang) They bully Zixia into a wall. (Not sure what she was expecting.)

Joker arrives and take Zixia away. The Longevity monk tag along for some reason. Red (Hair) Boy throws a fit and chases them. He punches himself so he can bleed. His reason? To create a rain of lava with his fire breath. (Neat!)

Joker, Zixia and the Longevity Monk eventually outsmart Red (Hair) Boy and escape. They run to the lair of Bull King’s sister for protection as he instruct them to. (This movie is all over the place.)

Bull King sis locks them up instead. This gives Joker a chance to re-ignite the flame of romance between him and Zixia. (Best part so far. It’s cute)

Insert ‘Love of a Lifetime’.  It ends with a kiss.

Joker attempts to escape with Zixia, who now decides to be with him despite the future. (So sweet.)

The Moonlight Box runs out of juice when Joker tries to teleport out. Bull King then captures them.

Meanwhile in Heaven, Monkey King recalls his past crush. He was in love with a girl who resemble Zixia. Of course this was Zixia’s sister. (See where this is going?)

After a long shave he eventually got some love… But Monkey King later felt love was a prison, and prefer his freedom. So he left his crush behind. (For shame.)

In present day Heaven, Zixia’s sister appears before the Jade Emperor to ask for help. She hope the Jade Emperor can restore her physical body so she can help Zixia and Joker. (Shouldn’t have slept with a Monkey.)

Monkey King listens in on the conversation. He finally understand the meaning of love. His crush was pregnant during the time he left. Their kid turns out to be (Spoiler) the Longevity Monk. He takes up responsibility to rescue the monk and go on that Journey to the West.

He bid his lover farewell and says he’ll reunite with her in the future.

‘Love of a Lifetime’ plays for the second time. How fitting.

Back on Earth, Bull King gets ready for his special wedding. Longevity Monk is on the menu.

Monkey King crashes the party with a super hero landing.

The evil siblings gets beat up. Out of desperation, Bull King tells his sister to eat his head. (Crazy!)

They join power and turns into this bad graphic monster.

Girl dies in battle. Destiny cannot be change. Cause Jade Emperor say so.

Jade Emperor watches from above.

And thus the Journey to the West begins!

Moral of the story, time traveling is pointless.

All in all this movie is a mess. Nothing to do with the actors of course. Tang Yan did well. Wu Jing performance is kinda fun. And Han Geng portraying of Stephen Chow character is not too bad. The script however is all over the place. There’s no clear sense of direction, conflict or stake. Director Jeffrey Lau tries to bring the random jokes of the old days back, but 99 percent of them fall flat. The first two films work for what it was. Odyssey Three fail as both a continuation and as a standalone. The plot starts off extremely confusing, and even after all the explanation, it’s still pretty much nonsensical.

A million flaws aside, the movie is not without moments. I found some decent bits under the mess. It’s a story about life and love, only told in a poor way. But the sweet parts does have some heartbeats. Just ruin by bad jokes. Still true love never dies.

Hence the song “Love of a Lifetime”. Wonderful song. I love every renditions of it. Too bad the movie couldn’t be as great as the song. Each time the song pops up, it makes the film that much better.

At the end of the day, it is what it is. Like the movie suggested, all that is will be.

Hope you enjoy my review! Thanks for reading!

This is WuxiaRocks, flying out.