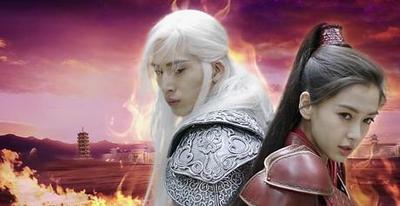 Can you believe our last movie date was in 2014?! This poor feature being forgotten and shoved in the last bunk of this ship. Let’s bring it back for our Saturday’s movie night! Feel free to drop movie suggestions through here or our twitter and if we can find quality sources, we’ll share it here. If you would like to review any movies, also let us know! It’s a one-time commitment to share your opinion!

Chinese Title: 微微一笑很倾城
Cast: Boran Jing, Angelababy, Johnny Yu Bai, Seven Tan, Janice Wu, Li Qian
Date Released: August 12th, 2016
Link To DL: 540p ZASK (Hardcoded Eng & Chi Subs) (Let me know if there’s problem!)
Synopsis from Wiki: Xiao Nai (Jing Boran) is a gaming expert who is also the most popular student on campus. One day, he comes across the campus goddess Bei Wei Wei (Angelababy) and it was love at first sight. However, it was not Wei Wei’s looks that he noticed, but her skills mastery of the online RPG game. Now, Xiao Nai must use his skills both in real life and online to capture Wei Wei’s heart. But does their love have the EXP to succeed, or will this relationship never level up?

People marry in the game for many reasons relating to power ranking and weapons. One thing is for sure: if divorce court looks this pretty in real life, we are in trouble. Lol.

Game characters Wu Xiang (Johnny Bai Yu) and Wei Wei (Angelababy) get a divorce. She’s as cool as a cucumber.

Just like my brothers in real life. They sit side-by-side but curse at the monitors. HAHA.

Wei Wei impressing the boy aka Cao Chang aka Wu Xiang from the Journalism Department, putting his twisted view to rest about her sugar daddy.

To enter a couples competition, Xiao Nai approaches the only female in the top 10 players and proposes marriage.

Her internal reaction. Lol. “You are strength!”

My favorite moment! Giving The Red String of Fate life in a virtual world. It’s beautiful and magical, as is the scene.

Xiao Nai makes petals fall for his lovely bride. Anyone wants to count them petals? LOL. (Inside joke.)

Yes. We have a ! Flying horse! Virtual wedding FTW!

Very, very, jelly beans in the case of these two. I still don’t know how she moves her head with those buffalo wings on each side.

Real life Wei Wei is smitten with her virtual hubby. Who isn’t?

Getting married online and a dating proposal offline? Girl is busy.

Unfortunately, her heart has a reel man already… She confesses her feelings, unaware that Xiao Nai is standing right behind her.

*I wish I could dig a hole and hide in it*

With the onslaught of badmouthing his new wife, Xiao Nai challenges jelly bean ex-husband to a dual.

I wonder how ridiculous they felt posing like F4 in the computer center. =P

Xiao Nai beats the crap out of jelly bean ex-husband.

He then takes his wife to a beautiful, bewitching spot reserved only for the top five game players.

They beat down couples after couples and in the finals round, Xiao Nai never shows up. Car of doom, anyone?

Once they know of the what and when, they race towards the magical vortex!

Xiao Nai apologizes for making her wait and asks to meet in real life.

Xiao Nai looks adorable, waiting for her to recognize him on the other side of the bridge. Kiyak!!

The classic conversation. “What a coincidence.”

Girls and their super short dresses! Like why?! He buys a bag of snacks and lets her use it to cover them chicken legs. Lol.

Another favorite moment of mine. When the star player scouts the crowd to locate his lady. >.<”

Afraid his staring will grill a hole in her forehead, she hides behind the snacks. heh.

Wei Wei trying to look calm…. All eyes on the couple.

He makes her New Year’s night an unforgettable one. 😀

Second favorite scene! When Xiao Nai and friends are fooled by the gaming company, he opts to brood alone on campus. Once she knows of the news, Wei Wei and friends hurry back to find him. What I love about this scene is the role-reversal. He’s always been her uplifter/supporter in the virtual world, ready to protect and comfort her. And now, she’s the sparkling bright spot in his real life. I cannot stop grinning.

Touched by her gesture, Xiao Nai lets the boys exit the elevator first and pulls Wei Wei back for a release of passion. Lol. I was waiting for one kissing scene ya’ll! The drama has so many!

All in all, I enjoyed the movie. I can’t compare it much to the drama (or the novel) cause I didn’t get very far because of work and uploading. I definitely really love the directing and virtual game scenery, was breath-taking and convincing of why many people would spend hours immersed in the virtual world. Boran was stiff in the beginning but gradually loosened up as Xiao Nai and I started to swoon in the latter 2/3 of the movie, especially when he looks at Wei Wei with a satisfied grin. Angelababy’s Wei Wei is likable and never over-the-top as a gamer.