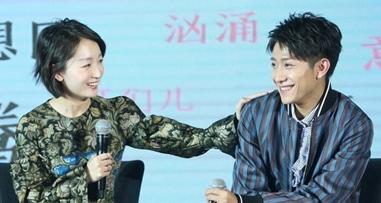 You know when I write about dramas, I rarely sit down and count them? Until I do and the list is humongous! There are about 20+ chinese dramas set to start filming in the winter of 2016, as you might already notice from the onslaught of press conferences and booting ceremonies this past week. To keep me sane, I have compiled the first batch here. Hee!

=======> ♦ Hawick Lau and Angel Wang Ou‘s The Legend of Jade Sword (莽荒纪) began shooting on October 8th with a press conference as well. Joining the leads are Lee Wei, Zhang Jun Ning, and Niu Jun Feng. Haven’t seen Lee Wei in a while! Jun Ning is a plus. X)

=======> ♦ Han Geng returns to dramaland after 8 years to be a male lead and part of the producer team of Hard Memory (失忆之城), an action-packed science fiction based on a manhua. It’s the first part in a planned franchise with 55 episodes. Production begins 10/12/16. It also stars Kenny Kwan (YAY!) and Zhang Yu Xi (My Little Princess).

It’s not easy for Dong Yu to find a male lead not that much taller than her! They’re so cute-looking together! =D