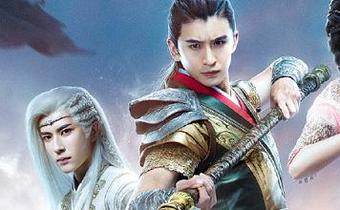 This must be teasing week or something, with each production taking turns to release their first trailer. Lol. Here’s another one added to the mix. Adapted from the popular Chinese game franchise Xuan Yuan Sword, Xuan Yuan Sword: Han Cloud (轩辕剑之汉之云) features Leon Zhang Yun Long and Alan Yu Meng Long as brothers who were separated and brought up as warriors on opposite side. Bromance, here we come!

But who needs a princess when you could have a warrior? Karlina Zhang Jian Ning. Same group as Leon. Aww.. That breaks my heart for our warrior girl.

Press Conference from this morning.

Alan…you’re pretty…but don’t smile. You scare me a little when you do. Lol.

His character at some point gets bound to a wheelchair?