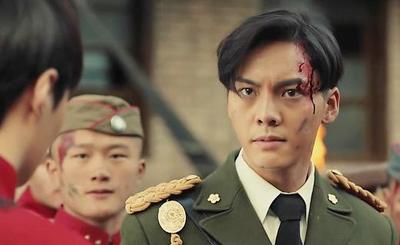 Time to say good bye to a train without plot (no wonder why there was no living person riding it!! LOL, sorry, I’m snarky) but a fascinating background. Sigh. So much potential, Show!

Xin Yue’s cousin comes by with good intention to tell Er Ye to live a happier life because he’s spending most of his days around coffins. He says she’s thinking too much, he’s merely preparing a coffin for himself. Right, that’s way better! Lol. It’s purposely constructed to be higher than Ya Tou’s so that she could lay her head on his shoulders when they reunite in Hell. BAH. How about we just bury you with your wife in the same coffin? Save space and land for other people?

Mr. Qiu and his man visit the Halloween tree and the former starts digging for a medallion. He finds a golden piece of map. The narrator then tells us that Mr. Qiu disappears from that moment on, removing him effortlessly out of our meandering plot. What was his purpose again?

Anyway, the narrator continues to tell us that war is imminent with the Japanese troops focusing their army to attack Changsha. We see Fuo Ye holding Xin Yue’s hand as they walk to the living room to bid goodbye. Xin Yue puts his giant coat over him and hurries him along, reminding him not to let everyone wait.

He stares deep and hard and long into her tiny face and tells her that after his meeting with Er Ye, he will immediately go to the bases and prepare for battle.

Fuo Ye keeps moving his eyes down to her juicy lips. Lol.

Putting up a brave face, she nods meekly and says she’s already sent the soldiers there. He disagrees, the journey to Bei Ping is dangerous, she needs some of his soldiers to protect her there. Xin Yue purses her lips a bit before noting about his safety. “I have already sent them back…But you…the battle field is dangerous…having a few more men is never a bad thing.”

He gives in because being stubborn is her specialty (and also being awesome. ;D). Fuo Ye, “After the war, I will personally come get you.” She smiles up at him, waiting for that day to come. Me and you and many others, Xin Yue!

They smile at each other and he tells her to sent him a telegraph once she reaches Bei Ping safely.

He then turns to their trusted servant, Xiao Kui and says, “When I’m not around, take good care of your madam.” Those caring words burn a hold in our sassy Xin Yue and her head hangs low…She bites down on her lips to prevent them from falling to no use.

When Fuo Ye turns back to his pretty wife, her glistening eyes stare up at him and the faucet breaks, letting two streams of tears down her cheeks. He reaches up to wipe them away and she grabs a hold of his gloved hand and lets out a tiny yelps of pain. Awww, my precious. Li Ying is very good in this scene, her smooth transition from subdued quietness to small cries of pain is beautifully acted.

Fuo Ye plasters on a disgruntled smile for her sake and she also does the same.

But this won’t do. So he pulls her in for a searing kiss, viewers and all eyes be melting at their intense smooching. AHHHH. This might tide me over until the next time they collaborate…. I think. Unless another actor top ChanYing chemistry.

He ends the hot kiss with a gentle one on her forehead and walks right up to the door, sloooooowly putting on his hat and standing at the entrance for a good pregnant pause before stepping out.

Xiao Kui asks if they are really not going back to Bei Ping (WHAT??), Xin Yue with her fingers still lingering on her lips, says that she won’t leave. If he wins, she wants to be here to congratulate him, but if he loses, it’s meaningless for her to return to Bei Ping.

Er Ye, Ba Ye, Jiu Ye, and Madam Huo are busy playing… mahjong? Ba Ye, of course, laments about his lack of luck today. When he asks to change seat, no one replies. He runs up to Fuo Ye like a puppy to complain about the other three bullying him, not leaving him with any traveling expenses at all. So they are gathered here to tell Fuo Ye their plans of escaping Changsha for the time being. Are you kidding me here?! You guys are the Mighty Mystic Nine! Not the Mighty Mystic flight!!

As for Fuo Ye, it’s his duty to protect this land and kindly reminds them that he still has a wife – Yin Xin Xue. Jiu Ye understands and promises to relay the words to the underlings of the Mystic Nine: they won’t ever cause trouble to Xin Yue Hotel. Not like you guys could anyway, that girl is filthy rich!

Time to leave! But no, Fuo Ye asks for a private moment to brood on the streets of Changsha. Because beside not having that much of a story, the story is really about how handsome and dashing William looks in uniform. =D Aww, he recalls meeting each of the nine family.

War closes in and Japanese bomb planes attack relentlessly overhead. Deaths, destruction, and chaos descend near their station and Fuo Ye rushes back in the frightened mob to help a fallen woman, putting him in direct path of a falling bomb. Fortunately, he has Fu Guan watching his back! Please don’t die Fu Guan!!

Oh crap, the Japanese troops have finally entered the entrance to Changsha! Fuo Ye takes a risk to detonate their shooting tanks and I finally get my series-long question answered. What does it take to ruin Fuo Ye’s perfect hair? A bomb!

The force knocks him over from behind but blood trickles down his forehead instead. HAHAH. Because blood in the back of the head doesn’t look as impressive! Get it together girls!

He stands up like the Terminator. *notes: no blood in one frame*

His men gather around him, momentarily relieved, only to hear footsteps of even MORE enemies crashing through the fort. Fuo Ye takes a knife (really? a knife?!! against shooting guns?) and jumps up on their mini barrier to make his grand speech.

“Changsha is our home. The people are our families. People can die but a home cannot be destroyed. I, Zhang Qi Shan, is not Superman (you get my drift), but I only know, today, the enemies are before us. They take our land and kill our people. You and I, it’s our duty as soldiers to defend this land. It cannot be destroyed!” They chant that last line over and over. He hopes that their kids will remember the Autumn of 1939 when they offer them joss sticks in the future. “That you guys follow Zhang Qi San into battle and fight until your last drop of blood to protect this home. Chinese people will not fall!”

He screams KILL and they march forward, only to be surprised by puppies? dogs? Golden Retrievers? Wait, did I get transfer to puppyland? Why are we throwing these furry cute animals into battle? *cries*

AHA! It’s the reunion of The Mystic Nine leaders! OMG! I’m so glad you guys came. The title of the drama is named after you guys for a reason! YAY! Even Madam Huo takes a sword and stabs the enemies like a badass (IN HER HEELS, YA’LL). Someone give her (and Fuo Ye) a more useful weapon. Lol.

I’m feeling the camaraderie so hard here! WEEE. A little late but gotta eat it up. The chicken of the group aka Ba Ye runs up to Fuo Ye, “We are all brothers of The Mystic Nine, how could we let you die in battle alone?” Aww. He’s smart, he has a hand gun. hehe. And I think Er Ye has something sharp attached to his arm. Is that Wolverine claws?

Overall, The Mystic Nine has a lot of flair, style, and pretty, but lacks in the most important area to stimulate the brains – writing. Episodes could have been shorter, plodding time spent in tombs could be better use in dealing with real people. Barely any character developments. Villains are non-threatening, stakes aren’t emotional stirring, leaving us with very little to fangirl. But we always find that little happiness week after week to help us along. 🙂

First time, I did a same-day recap! Woohoo!