Xiao Nai really doesn’t fool around when it comes to work and dating. He is actually really sly here, courting Wei Wei in-game and then delivering the final kill in real life. Da Shen is Da Shen indeed.

Stunned, Wei Wei asks if his account is hacked. Nai He tells her about the new couple PK tournament and she is the only female in the ranking. She agrees, because the prizes are too tempting. She just wants to go through the formalities but Nai He disagrees. “I’m Yi Xiao Nai He, we can’t be careless about my wedding.”

Yu Gong is bragging about Meng Yi Ran asking for help to fix her laptop, declaring their spring days are here. He knows they can’t aim for the campus beauty though but the beauty’s girlfriends will do for them. This is how Xiao Nai drops the bomb: “I am getting married in the game. So I am also a married man now. It’s not appropriate for me to fix some other girl’s laptop.”

Everyone gets excited to meet Xiao Nai’s new wife in-game. Yong Hou asks if she is the girl who stole their third brother, but Yu Gong corrects him: “So you’re the girl third brother stole?” Lol. They recognise Wei Wei from the ranking and from the Zhen Shui rumours.

She explains that she is “married” to Nai He now, which is when he intercepts: “Don’t look down on her just because she made a mistake in believing in someone else in the past.” Pfft. This is the beginning of more of Da Shen’s killer one-liners. They all decide to fight a monster together to get closer to each other.

Their chemistry is great. When Hao Mei praises her skills, Nai He accepts the praise on her behalf, which makes the guys roll their eyes. Nai He tells them their wedding is in two days, even though it seems like he has plans. But the day is a good day for a wedding, so he will juggle both.

Wei Wei happily awaits her “wedding” day. It so happens it is also the day of the basketball game. Already it shows Wei Wei’s priorities. Even though she idolises Xiao Nai, she would rather skip the basketball game because she needs to get “married” to Nai He. She just doesn’t know it is the same person yet.

Her girlfriends manage to persuade her to attend. Xiao Ling’s boyfriend, also on the basketball team, saved them seats. It is almost full even though the game is three hours away. When they hear Xiao Nai might not be coming after all, they rather have first lunch first. No point trying to chop a seat now, it will be empty when the others find out Xiao Nai is not coming anyway. 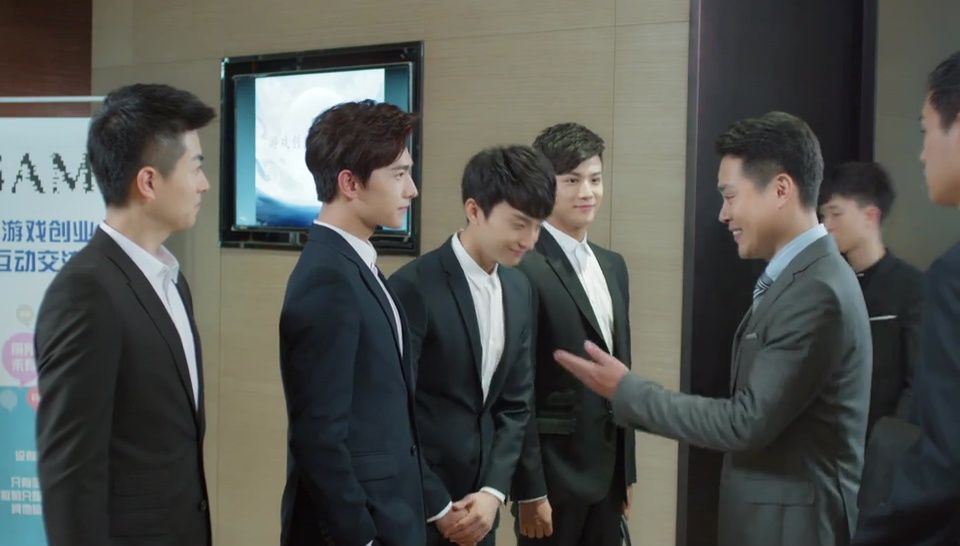 Xiao Nai and co are making a business presentation for their game, with a lot of big-name companies in attendance, including Feng Teng Corp. Xiao Nai presents their idea: “L10”, basically a mash-up between MMORPG and Sims in ancient times.

Many backers show interest in the group’s game, but shady music follows a certain backer, from Zhen Yi Tech. Yu Gong is happy with all the interest, but Xiao Nai just nonchalantly excuses himself. He has another appointment.

The girls return to their seats, where many fangirls have left. Meng Yi Ran and her lackey are here, though. Er Xi says it is a good thing Xiao Nai doesn’t care for any girls including Yi Ran, or else she would cry for three days straight, lol.

A junior from the basketball team approaches Wei Wei and asks if he can take her out for a meal if they win. Wei Wei asks if he will lose. He says no, and she tells him to work hard. The girls marvel at how the junior took Wei Wei’s words at face value and applauds her leveled-up rejection techniques. Wei Wei: “You improve when you get practice.” The girls threaten to pummel her for that, ha.

After the game ends, Wei Wei ruuuuns back to her laptop, ready for the wedding. Other games aside from Xiao Nai’s party have already crowded the place. These are all high-level clan leaders, who are indebted to Nai He. Basically, they are just waiting for Nai He’s red packet. Wei Wei worries that Nai He will go bankrupt over it, since the red packet does cost real money.

He gives Wei Wei a new equipment, which I think might be the same one Zhen Shui wanted to give her as a break-up fee. She only accepts it after he says it is for PK purposes. She gives him a ring as her dowry. He tells her it is fine if she just showed up but his happiness is apparent.

The time is finally right, and Nai He and Wei Wei become the game’s 158,999th couple, lol. IRL, the boys happily cheers for the union. So cute. Yu Gong is still in disbelief over Xiao Nai’s new married man status, he thinks Xiao Nai will be a bachelor forever with his carefree attitude.

Wei Wei’s wedding march goes past the same bridge, where another guy comments how Nai He picked up Zhen Shui’s “leftovers”. Xiao Yu clan is also here, and they too make snide remarks. Leader of the mean girls, Yao Yao doesn’t say anything but she is the exact type of person who kills using someone else’s sword.

In the in-game shout-out, someone comments that Nai He wins over Zhen Shui but Wei Wei loses to Yao Yao. The boys unhappily disagrees and invites anyone who disagrees to PK. Of course no one accepts the challenge.

Wei Wei doesn’t really care though. While waiting the wedding march to be over, she starts working on her homework. The peanut gallery gossips over how they have seen Yao Yao and Nai He together. They speculate that Yao Yao dumped Nai He, Zhen Shui dumped Wei Wei and the two leftovers come together due to their sadness.

She immediately messages Nai He asking if he knows Yao Yao. He says no and explains that Yu Gong added Yao Yao to their party once. But her skills are too weak so he kicked her out. Satisfied with the answer, she continues doing her homework.

The boys wait for the couple to have their “first night” together. Xiao Nai excuses himself to answer a phone call and when he is back, he has the biggest smile ever. We see how Nai He and Wei Wei are having their “honeymoon” on a hot-air balloon, overlooking the vista.

Wei Wei comments that Nai He is taking this so seriously. So this is how they spend their days together, like a lovely couple in the jianghu. It is just a mission though but it makes Xiao Nai smile.

Wei Wei and Er Xi are queuing for lunch. Er Xi is browsing the campus forum, where a poster mentions his life perception completely shatters when he saw a campus beauty stepping out from an expensive car.

There is also a photo included. The photo is mosaic-ed, but it is Wei Wei. Er Xi worries but Wei Wei says they will have lunch first and find the guy out later, using his ID. In the library, Xiao Nai overhears students discussing the photo and recognises Wei Wei’s bag.

The girls learn that the poster ID is a famous one, belonging to the foreign language department’s genius Cao Guang. Er Xi helpfully describes him: he is good-looking, from a good family, talented with languages. But he still loses to Xiao Nai.

Wei Wei finds Cao Guang and demands that he apologise and delete the post. She explains that the expensive car belongs to the mother of the boy she is tutoring. She even has a photo to prove it but Cao Guang thinks that a computer engineering student can easily photoshop the photo. What an ass.

He says of course he doesn’t feel suspicious of all girls coming out from expensive cars but it is Wei Wei after all. Wei Wei scribbles an address on the back of the photo and tells him to look for the answer himself. Xiao Yang, the boy Wei Wei is tutoring, needs an English teacher anyway.

Later, Nai He asks Wei Wei to meet him at an in-game location. Nai He has kidnapped the guy who slandered them during their wedding march earlier and he wants her to slowly torture him with her least offensive weapon. The guy screams for them to kill him now instead.

Nai He won’t let him die that easily though, he will replenish his health so the torture can continue indefinitely. Wei Wei wonders why the guy won’t just go offline. Nai He explains that the guy is in the very final stages of an excruciating mission right now and going offline would mean failure. Wei Wei marvels at the cruelty of Nai He’s revenge and he just thanks her for her compliment.

Xiao Yu clan passes by and they badger Nai He and Wei Wei under the banner of being righteous. Nai He comes online, turns around and coolly tells them to disappear if they don’t want to die.

Ryu: No surprises for me since I have read the book, and I think a lot of viewers have as well, but it is nice to see how it all plays out on screen. Surprisingly, the best part about this show isn’t Xiao Nai and Wei Wei (yet) but the friendships! Like Kap mentioned, it is amazing how both Xiao Nai and Wei Wei gets their own F4. Sure, so far they are pretty underdeveloped and don’t have much to do outside of interacting with the main characters but when those interactions are this fun, it is pretty hard to complain about it. And oh, Yu Gong is hilarious. I want to be his buddy.