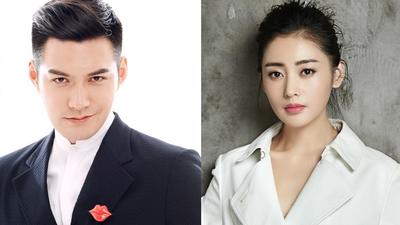 Oh My Lord. Isn’t that this year’s hottest pairing or what?! Weibo is buzzing with news about their possible collaboration for the upcoming period piece The World of Dogu (独孤天下), following the story of Dugu Qieluo, known as Empress Wenxian (文獻皇后) of the Chinese Sui dynasty, wife to Emperor Wen. I read their story on Wiki and was immediately impressed since Emperor Wen was one of the few Emperors with the least number of concubines or at all (at least while his wife was still alive.) They married young, she was 13 and he was 16, and he swore an oath to not have any other woman bear him children (ah, so romantic!)

Both of them have such amazing, intense eyes, that I can’t wait to be drilled by them. LOL.

Crystal at a Recent Event:

From the writer of Fighter of the Destiny and Female Prime Minister (Zhang Wei) and director of The Legend of Fragrance and Liu Shan Men (He Shu Pei), The World of Dogu (独孤天下) begins production in 2 weeks. We shall know if they accept the role or not then!