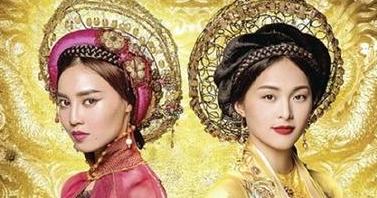 You know nobody likes pretty things more than I do! When I saw pictures of this project, I was thoroughly impressed with the colors, sets, and cinematography. On the shallow side, the pretty actors and actresses did kick my interest up a notch. Dubbed as the next most anticipated action fantasy film, Tam Cam: The Untold Story, is a Vietnamese fairy tale, very similar in story structure to Cinderella. Our heroine, Tam, is a beautiful child, daughter to the first wife. However, after her mother died, her father married another woman and she gave birth to a baby girl named Cam, whose looks is always deemed as inferior to Tam. Stepmother is always jealous and teams up with her daughter to bully Tam. But kindness pays off, allowing Tam to meet the handsome Prince. Happily Ever After…? The story is long so if you want to read, feel free to follow this link.

Our heroine Tam, played by Ha Vi. They picked the right actress for this, she has that kind, hard-working face down already. Lol.

Stepmom played by Ngo Thanh Van, also the producer and this is her directorial debut!

Our handsome prince, played by Boy band 365’s leader, Isaac. He’s handsome and that glorious armor!! 365 is a boyband created by Ngo Thanh Van, hence it makes sense she’s promoting them in this movie.

Our OTP in gold. SO PRETTYYYY.

365’s Jun. An eunuch, promising to leave a deep impression on you.

365’s Will. A sword-wielding general and friend of the crown prince. Instead of a fairy tale godmother, we have a godfather.