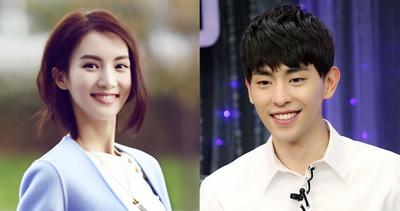 Interesting. Interesting. So it’s not Elvis Han, like many hoped. I don’t remember these two being in a project together but here they are caught leaving a hotel and being chummy on the street. It’s like asking to be exposed, no? They look hella cute together so I approve. =D Gina Jin (Imperial Doctress) is only two years older than Deng Lun (15 Years of Migratory Birds) but already they calling it an older-sis-younger-bro romance. PSHHH. People. Both sides haven’t responded yet.

Two gifs. Aww. Gina being cute and Deng Lun patting her butt? LOL. Okay. You two. Braver than many.