=======> ♦ Wallace Huo‘s movie, Hide and Seek (捉迷藏), drops new promos with Qin Hai Lu and Wan Qian! The story follows clean freaked hero trying to locate his brother’s whereabouts and finding himself the object of the same mysterious symbol all over his brother’s apartment. Out in theaters on September 15th.

=======> ♦ Andy Lau and Huang Xiao Ming in new action comedy movie, Mission Milano (王牌逗王牌) with Wong Cho Lam and Nana Ou Yang, directed by Hong Kong director Wong Jing. The synopsis revolves around a wealthy entrepreneur (HXM) who goes undercover to protect a new invention, which has the potential to end famine, from falling into the wrong hands. Andy Lau plays an Interpol inspector who is sent to help him. Hitting theaters on October 1st.

=======> ♦ Wallace Huo caresses palace maid and throws tantrum in latest pictures for Ru Yi’s Royal Love In The Palace. It is said that his character is the most hated character from the novel. LOL. Booting ceremony was held on the 23rd and a new poster came out as well.

He shaved his head too!

LOL! This cracks me up. How could you be romantic when bored, prying expressions watch you through it all? XD

=======> ♦ Fantasy War Series The Snow Queen (雪女王) with Re Yi Zha, Kimi Qiao, and Dylan Kuo drops new posters. It follows the journey of a young girl forced to grow up overnight due to the brutality of war and hate. DYLANNNNNNNNNNNNNNNNNNNNNNNNN!!!

=======> ♦ Peter Sheng Yi Lun to take the lead role alongside Sandra Ma in Oh My General (将军在上). Previous reports had Ma Ke in the same role. He’s out now. Press conference was held today with the leads. Look at Sandra handling Peter below. Heh. 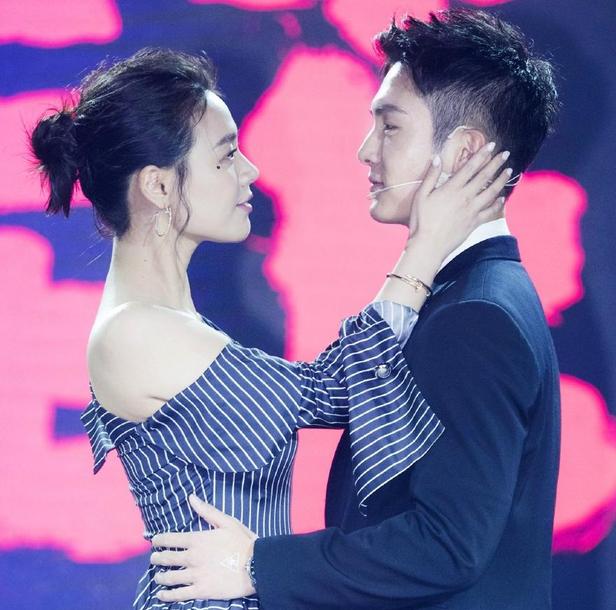 Weird Promo Posters for them. O_O

=======> ♦ Ruco Chan will unite with Nancy Wu for a new tvb drama, The Alliance (同盟) from the same producer of A Fist Within Four Walls, Jazz Boon. He will also reunite with Paw Hee Ching. They have acted as mother and son a long time ago in a modern ATV drama that I loved. AWWWWWW HECK TO THE YEA!! It’s being called the modern version of Wu Ze Tian. Interesting.

Anyhoo, full subsong video of their duet for A Fist Within Four Walls. “Never Know You Are the Best.”

=======> ♦ Tong Hua’s The Starry Night, The Starry Sea completed its modern scenes and will begin shooting its ancient scenes in November. Male lead and producer is William Feng Shao Feng, and his leading lady is Hayden Kuo.

=======> ♦ Huayi Brothers has a new movie in the works, Circle of Death (死亡循环). They are planning to invite many top stars. The author of the novel will be in charge of the movie scripts.

=======> ♦ The third series in the sparkling jewelry franchise, following Diamond Lover and Jade Lovers, is Return the World to You (归还世界给你).

=======> ♦ William Chan and Liu Shi Shi‘s names are confirmed for the long and draggy novel adaptation of Zui Ling Long (醉玲珑) written by Shi Si Ye. From the same production company as The Journey of Flower and to begin filming in October. RED FLAG. Lol. Did you know that William is older than Liu Shi Shi? But because of his boyish face and flirty persona, I thought he was younger than the quiet and demure Shi Shi. But that’s not the main point…. the synopsis? A time-traveling woman lands herself in history and gets embroiled in the princes’ battle for the throne. Let me see…this reminds me of… Bu Bu Jing Xin starring Liu Shi Shi… again? WHAT? Why? But online fans are funny: Nicky Wu’s Son-In-Law wooing his wife onscreen next. XD

The other cast member is Joe Xu Hai Qiao. Interesting. I like him. A lot.

=======> ♦ Maggie Jiang and Ryan Zhang Kai are up as leads for upcoming modern drama, Guo Min Da Sheng Huo (国民大生活). Our OTP meet in a foreign country at a funeral. After experiencing an earthquake together, they decide to cherish the fated meeting. Alas, their fated destiny is tested again and again once they return to the norm of their lives.

=======> ♦ Zhou Dong Yu has a few rumored projects in the making but the one that seems most likely is with Zhang Yi San called Chun Feng Shi Li Bu Ru Ni (春风十里不如你).

=======> ♦ Zhang Yi San and Cai Wen Jing (The Interns) are also names attached to the Chinese Remake of Kdrama Kill Me Heal Me. Hmm, I can’t imagine these two together.

=======> ♦ Zhao Li Ying‘s Korner: New music video for Days of Our Own (我们的十年). At this point, I don’t think they can release anything new anymore…

=======> ♦ Weibo-wise: Li Ying posted a music video with the caption, “My Martial Arts Dream.” THAT SONG. THAT SONG. If you’re a tvb addict, you will recognize it. Our girl looks so pretty in ancient series. I want her to live there…