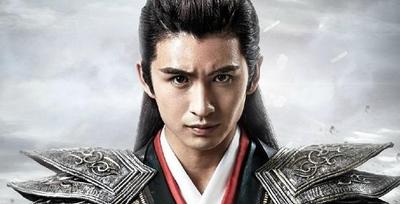 Leon Zhang Yun Long. He and Alan are brothers, separated at birth and raised as fighters/warriors, on opposite side. Leon belongs to the secret group called Flying Feathers, in charge of aiding Zhuge Liang’s quest to expand the Kingdom of Shu.

Our female lead, played by Guan Xiao Tong. Described as naive, straightforward, and sunny. Princess of a tribe.

Ju Jing Yi. She looks so pretty and like Frea said, a fairy indeed. Alan’s childhood sweetheart in the drama. Love her dress!!

I spat out my drink!! Are you reminded of Sha Jie Jie too? This is Vengo Cao. I didn’t recognize him at first glance. Lol.

Synopsis of the Game from Wiki: The game is set in the era of the Three Kingdoms, Wei, Shu and Wu and feature famous historic figures. Zhuge Liang, the chancellor of the kingdom of Shu had engaged on multiple northward military expeditions with little success. On Zhuge Liang’s Third Expedition, a secret military group called “Fei Yu” (飛羽), meaning Flying Feather, deriving its name from the two famous generals of Shu kingdom – Zhang Fei and his sworn elder brother Guan Yu), carried out various missions in the war to further the interests of Shu. However, on the Fourth Expedition, thanks to its own group of powerful secret operatives, Wei was able to discover and exploit critical weaknesses of Shu, prompting The Feathers to take action. The game addresses issues of loyalty and duty, as well as the harsh realities of warfare and peace.

The girls are styled beautifully but the boys could use some help. What’s the practicality of claws?!! Two gifs of them filming. Leon is one cheeky boy already.

Please note the maid’s expression when he plants the kiss. LOL.