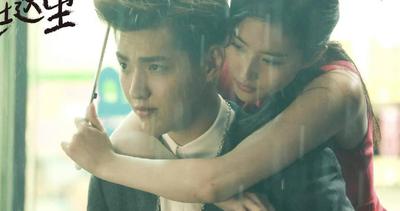 =======> ♦ Never Gone (致青春·原来你还在这里) is the film adaptation of the novel, So You’re Still Here by Xin Yi Wu (So Young). Seems like your typical mean-boy-quiet-girl storyline but just a tad more serious because the heroine gets pregnant and they are torn apart, only to be reunited years later. I’m excited to see this because Kris looks quite expressive and the tough-guy act always gets me softened quickly. Plus, the numerous pretty faces help too. hee! Release date: July 8th.

Wallace getting the Gu-Jun-Pyo hair treatment. ROFL. Blink and you’ll miss his reaction.

=======> ♦ Three (三人行) with Vicki Zhao, Louis Koo, and Wallace Chung. Yep. Wallace strikes again! I like that he plays three completely different characters in three movies. A psycho here. My favorite has got to be his humorous role in Bounty Hunters though. Release Date: June 24th/30th.

=======> ♦ I Love That Crazy Little Thing (那件疯狂的小事叫爱情) with William Chan, Jessica Jung, Tina Tang, and Nicholas Tse. William’s screaming had me rolling. 50 Shades of Grey? And I have never watched the movie or read the book! Release Date: August 5th.

=======> ♦ The Precipice Game (魔轮) with Ruby Lin, Peter Ho, and Kingscar Jin. A wealthy girl rebels against family and joins her boyfriend for a treasure hunt on a cruise. Why does it feel like the Saw franchise with people killed left and right? Intrigued. Release Date: July 1st.

=======> ♦ Risking Life for Love (致命恋爱) with Ha Ji Won, Bolin Chen, and Chun Jung Myung. Her red dress looks like the blue one she wore to Shanghai Festival. Lol.

=======> ♦ Railroad Tigers (铁道飞虎) with Jackie Chan, Nick Wang, Darren Wang, and Huang Zi Tao. You know, I would love you more Jackie if this teaser was more relevant and if you promoted Ashton Chen too! Grab that kid and make him famous! Release Date: December 16th.

=======> ♦ Comedy film For A Few Bullets (快手枪手快枪手) with Lin Geng Xin and Zhang Jing Chu. A badass heroine allying herself with a con man! I like what I see. The hilarious themesong! Release Date: July 15th.

I hope you at least like one of the featured movies so my efforts feel worth it. Lol.