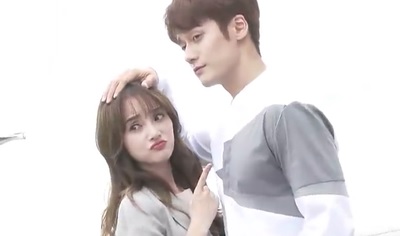 Adapted from the novel You Love Me This Much, I’m Going To Take It Seriously (你这么爱我，我可要当真了) written by Wu Xiao Bai, the drama title has been determined to be Love Me & Convince Me. The selling point they are harping on is it’s being directed by Korean director, Pyo Min Soo, of hit series Full House. The strong hand in directing definitely shows in the first trailer. Everything is beautiful and snappy, matching the bickering flow of our OTP. I’m hoping that the story also holds up because ageless beauty Li Xiao Lu has some sweet chemistry with Jiang Jin Fu already, who is almost a decade younger. YOU CANNOT TELL.

It does help that they kiss kazillion times in the trailer. HAHAHA.

A ton of screencaps from me because the trailer is hilarious! Starting with his middle finger. XD

You know it’s a Korean-flavored series because of the obligatory shower ab scene. Lol.