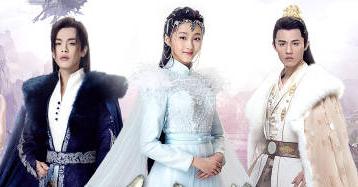 Boasted as an original story from Shanghai Film Media Asia and Tencent Penguin Pictures, Novoland: The Castle In The Sky (九州天空城) is a short fantasy drama starring some rising new faces in Zhang Ruo Yun, Guan Xiao Tong, Ju Jing Yi, and model Liu Chang. While the trailer is beautifully shot with magical flying objects and winged fairies, I can’t peel my eyes of off the ladies. They are too delicate and pretty, leaving Zhang Ruo Yun with the weird eye color contacts (the girls had it too but it’s pretty on them, Lol). Terrible choices!

The Synopsis that I translated before: In ancient times, because of their ability to fly (or make flying objects), the Yu Clan is regarded as gods by all. They live away from the people, high up in the mountains, busy constructing a castle in the sky, to the envy of others. One day, the castle explodes, causing an uproar in the Yu Clan. When the human race carefully observes the movement of the stars and mistakenly points to Yi Fu Ling (Guan Xiao Tong) as the suspect, heir/king of Yu Clan, Feng Tian Yi (Zhang Ruo Yun) tries his best to save and protect her, truly believing that she’s innocent of the accusation. In the end, all the manipulations stem from within the Yu Clan. Some don’t want to be consider as gods; they want to acquire and enjoy the wealth and benefits for being the “superior” clan. And starting a war seems to be a good idea. When Tian Yi understands the source of resentment, he and Fu Ling set out to defuse the growing hostility and impending war.

Lining them up from tallest to shortest. Jing Yi is small!

Her sweet features might break a lot of hearts, this one. Ju Jing Yi.

Took some screencaptures from the Trailer:

He didn’t become a butterfly in the end right?