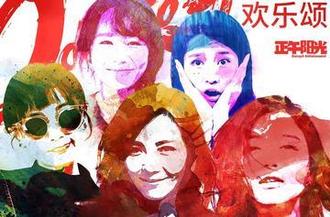 Darn April’s Fool!! It sucks when I literally believe everything people say. I mean, they say it so earnestly (such good actors around me). I fell three times today, one of them involved an onscreen pair I really like…dating. LOL! Then my brother called me at 6AM telling me to go bail him out.

=======> ♦ Republican drama Magnificent Sword with Beauty (美人如玉剑如虹) with Sammul Chan drops a whopping 23-minute trailer. That is too long my friend.

=======> ♦ Sweet Sixteen (夏有乔木 雅望天堂) with Lu Shan, Han Geng, Kris Wu, and Joo Won drops two trailers with the concept of black vs white. As in melo vs light? Got that down!

=======> ♦ Movie Chongqing Hotpot (火锅英雄) with Chen Kun and Bai Bai He. A gang of four opening a restaurant in an old bomb shelter to carry out illegal activities, only to discover an underground tunnel to the richess/bank next door. What to do?

=======> ♦ Bosco Wong‘s Buddy Cops looks like a pop-corn movie with no thoughts involved.

=======> ♦ Opening Themevideo for Chinese Hero/God of War Zhao Yun (武神赵子龙) with Lin Geng Xin and Yoona. Did they just reveal the OTP’s ending in the mv? O_O But I have to say, this is a great opening song. Feeling it!

=======> ♦ Ode To Joy (欢乐颂) reveals their second trailer. Air date has been pushed back one day. So wrong! [For more premiere dates, click here.]