=======> ♦ Gui Gui‘s new variety show Crime Scene, is adapted from Korean Variety show of the same name. The other 5 members are Qiao Zhen Yu, Professor He, Bai Jing Ting, Sa Bei Ning, and Angel Wang. The show premiered on March 27th. Below is Episode 1 for anyone who is interested. Go to the same channel for the next episodes.

=======> ♦ More stills from Sweet Sixteen. That name is so wrong! Joo Won looks amazing but I’m not sure how I feel about him playing the D-guy.

=======> ♦ TVB has a new vampire drama airing 4/11/16. Blue Veins stars Kevin Cheng as an immortal vampire hunter, Joel Chan as the chic vampire and ladyloves in Kay Tse and Grace Chan. Interesting. Some teasers below.

=======> ♦ Chinese adaptation of Japanese series Shinya Shokudō is known as Midnight Diner (深夜食堂), starring Huang Lei as the midnight chef. Janine Chang has a guesting role as one of his night customers.

His co-star Xu Wei Zhou. This kid looks so cute and handsome when he’s all cleaned up. Love the fruits pattern on his suit.

=======> ♦ Filming begins in May for drama adaption of Once Loved You, Distressed Forever (我曾爱过你，想起就心酸). What a positive title. Lol.

=======> ♦ Vicki Zhao‘s film, Fang Lang Ji (放浪记 ) stopped filming and the director came out to say it’s because the sponsors and investors find the topic far from what mainstream audience would enjoy. Filming would commence in the distant future. What? Is that even a thing? The story sounds perfectly plausible to me. Vicki Zhou’s constant rivalry with veteran Joan Chen until they both realize that life in itself is a piece of art.

=======> ♦ Nicky Wu and Stephy Qi are up for the drama remake of Korean series, Women in The Sun, which starred Kim Ji Soo and Lee Ha Na. One is the adopted child with perfect credentials and visual, until her secret threatens to take all those away. Afraid that they won’t love her like before, she abandoned her adopted parents’ real daughter many years ago.

=======> ♦ When a Snail Falls In Love begins production on April 15th. Chen Qiao En already hopped to the studio for Ghost Blows Out the Candle with Jin Dong. SO JEALOUS. THIS WOMAN!!

=======> ♦ Fei Wo Si Cun’s The Starry Sky started production on 4/8 without announcing the leads. Why so mysterious, crew?

=======> ♦ Yang Yang, Crystal Zhang Tian Ai, and Deng Chao are announced to film movie adaptation of I Belonged To You (从你的全世界路过).

=======> ♦ Sammul Chan and Jia Qing‘s modern drama, Songs For Our Love (我们的千阙歌), started shooting two weeks ago. Jia Qing plays a student lawyer under manager Sammul before her true identity throws them into a loop.

=======> ♦ Ratings Corner (PIC): Huang Xuan’s drama, Hunter, is the only drama to hover over the 1% mark, even when it had less promotion than the big guns from Hunan TV (Zhang Han’s Mountain and Lin Geng Xin’s Zhao Yun). Go underdogs!

=======> ♦ Zhao Li Ying finally wrapped up her scenes for Chusen on April 11th. Honestly, this production makes me sad. Either they are secretive or they don’t get along very well. I haven’t seen even one selfie pic with Li Ying and Yang Zi at all! It feels like the ladies were really affected by the politics prior to filming and no one stood up to mend the bond. Sigh. Li Ying will have a 2-week break before she becomes our general in The Legend of Chu Qiao! Shawn Dou has been reported as the other male lead – the one who chooses power over love and she’s left with no choice but to burn all he has to the ground. Li Ying was trending on weibo on the 10th because people were sharing old photos of her and her family members on the net. She posted a weibo message telling them to respect her family’s privacy and take it down. The same reason I won’t repost those.

Her as spokesperson for Ivvi phone. 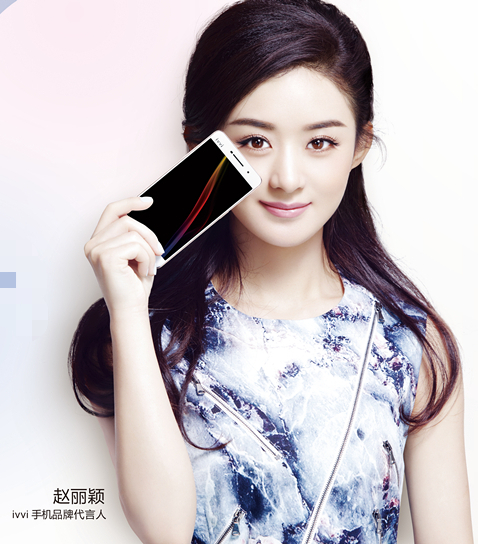 Uploaded a few fanmade videos of our girl!

Zhao Li Ying for Boss & Me. She’s so cute! On a gloomy day, I just need to watch this.

Zhao Li Ying and Nick Wang. Amazeballs! Seamless transition and great use of cuts. They got me at the song!