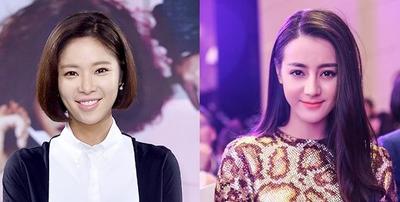 Another remake. Yang Mi’s studio (in short for many collaborators) has bought the copyrights to popular Korean series, She Was Pretty, starring Hwang Jung Eum, Park Seo Joon, Choi Siwon, and Go Joon Hee. Dilraba Dilmurat name is in the running (her name is in the running for many projects as of late). If people had a hard time buying Jung Eum being not pretty, how are they gonna take the flawless being in Dilraba Dilmurat? Lol. Yang Mi is pushing her real hard, lining her with project after project. The story is typical enough, but thanks to the sizzling chemistry between the OTP and the quirkiness of Choi’s character, it became a crack drama in no time. At this point, I’m more interested in who they will cast as Siwon’s Chinese counterpart.

Synopsis from Wiki: When Sung-Joon (Park Seo-Joon) was young, he was ugly and fat. He also didn’t have any friends, but popular and pretty Hye-Jin (Hwang Jung-Eum) became his friend. She gave him comfort on rainy days when Sung-Jung feels traumatised. They held a special connection with each other, but Sung-Joon and his father moved to the United States. 15 years later, Sung-Joon returns to South Korea. He and Hye-Jin are set to meet again for the first time in many years, but Hye-Jin is unable to show herself in front of Sung-Joon who is looking for her. Both of their appearances have completely changed. Sung-Joon is now handsome and perfect in his appearance, while Hye-Jin looks nothing like her former pretty self. Hye-Jin is also unemployed and looking for a job.

Hye-Jin then asks her best friend Ha-Ri (Koh Joon-Hee) for help. Ha-Ri is to pretend she is Hye-Jin and go meet Sung-Joon. At their meeting, Ha-Ra pretends to be Hye-Jin and tells Sung-Joon that she is leaving for England the next day to study.