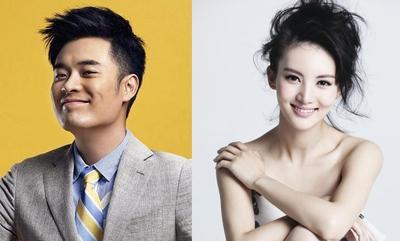 I’m feeling rather lukewarm about this series, mainly because our hero is described many times by novel readers as another version of Jin Yong’s famous character, Wei Xiao Bao, and I’m not fond of him at all! Then they cast Michael Chen He (Run Brother) in the role and that’s kind of a deadly combination – cannot take this man seriously. Lol. I hope he proves me wrong because the only medium I have watched him in is variety shows and that is very different for everyone. Rising new face Gina Jin plays one of the main roses in his life. Noooes!!

Synopsis: The drama will remove the time-traveling element, as we expect it to, but I’ll just summarize the book as is. The story follows 21st-century man Lin Wan Rong (Michael Chen) who is touring around Mount Tai when he accidentally falls into a dark space, transferring him to a parallel world, existing at the same time as the Song dynasty. In this world many historical facts are in contrary to what is written in historical books. For instance, Xiang Yu defeated Liu Ban at the Battle of Gaixia and never committed suicide, as a result.

While he’s described as smart and generous, he also enjoys joking and playing around as much as the next person. Using his economics wits, modern knowledge, and a whole layer of thick skin, he’s able to rise to become a lord of his own. However, with money and power, he inadvertently gets entangled in a power struggle between the royal members and somehow finds himself leading a troop to war.

Now in the drama script, Lin Wan Rong survives an accident and to return the favor to his savior, he comes to the Xiao Residence in Nanjing to work as a family servant (jia ding). After a misunderstanding, he meets and falls for his soul mate in Xiao Qing Xuan (Sierra Lee Xi Rui). Thanks to his smart wits, he’s able to help the Xiao turn their business around. In the mean time, the Tao family preys on Xiao like a hawk, conspiring with other businessmen to kidnap Wan Rong and Xiao Yu Ruo (Gina Jin). To save Yu Ruo and the man she loves, Qing Xuan ends up being poisoned and is forced to leave the capital for help. Now that he clearly sees the malicious intent behind the Tao family, Wan Rong helps defeat them, then locates the mastermind behind as a clique called Miao Xian. Following the request of many officers and lords, he trains a group of soldiers to attack Miao Xian and successfully overwhelms the enemies. Impressed by his bravado, the Emperor wants to reward him, and when he respectfully refuses, believing that the soldiers deserve the recognition much more, the King has no choice but to give him the title as the world’s best jia ding (in tune with the chinese title 极品家丁 = ji ping (meaning best/highest grade) jia ding. In today’s term, ji ping means someone who acts outrageously and unconventionally.

That’s all I have for now, after hours of laboring in the dictionary world. XD

Nice to see Gina step outside of Tangrens production to venture on a bigger scale. Her character is a big sister in the family and very protective of her younger siblings.

Produced by Huace Media (Demi-Gods and Semi-Devils) and Shanghai Juxin Media Creativity Co. (Braveness Of The Ming, Les Interpretes), Legend of Ace is directed by Wang Wei and written by Mi Meng.