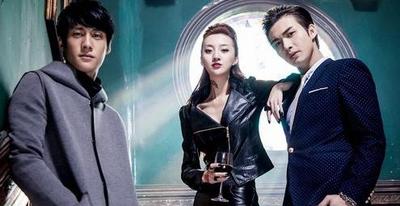 Feels like I’ve been in webdrama land for a while now. Can’t help it! The Legend of The Monster is another to air on Qiyi on February 26th (VIP pass), and is based on an urban fantasy novel written by Ke Rui. I tried reading the novel and was left feeling quite confused because of the numbers of characters! Interesting characters but way too many to keep track. The quick description you read is as much as I could glean from the story and baidu page. It’s basically a world where monsters and demons lurk among humans and live their very ordinary lives, trying not to get caught, until the day a greater evil force arrives. There is a human girl in the mix. Who are we kidding? There is always a human girl!

Yang Shi Han (Beauty Apartment, The Legend of Zu). A 300-hundred years old Shadow demon. Lowest ranking group in the monster hierarchy, he works as a taxi driver, like others of his own kind. His group is supposed to live in the morning and die at night (like shadows) but he’s able to form a human body and lives among human, hoping that one day he can become a human boy. I meant MAN. Look at those abs. 😛

Yes. You didn’t see wrong. Whatever that you see. *whispers innocently*

Vin Zhang Bin Bin (The Chronicle of Life). 700-years old cynical and rebellious werewolf. He’s a manager at a library and only works when he feels like it. Freedom is his top priority and working hard is the last thing on his mind. Reluctantly, he has to work with other demons to save their city from outside forces.

Zheng Ya Wen (Why Do We Get Married). 1000-years old sexy vampire who works as the number 1 doctor in the city. Though she feigns indifference, she’s kind, helpful, and responsible. And sometimes a total badass.

Wang Yi Jia. An arts student who believes that monsters and humans can co-exist. She fights alongside the demons to keep the city safe from those with malicious intent. She’s the only person our wolf boy cares about.

Directed by Zhang Li, The Legend of The Monster has 20 episodes and premieres on February 26th through the VIP channel on Qiyi.