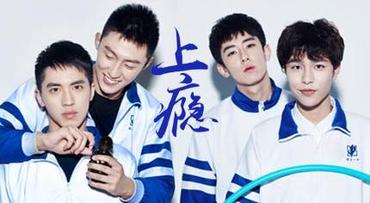 Heroin aka Addicted (你丫上瘾了) is a webdrama that premiered about three weeks ago, based on a novel written by Chai Ji Dan (Counterattack), focusing on gay teenagers and their discovery of themselves and love amidst the hormonal period of high school. The title is a pun of their names meaning heroin – an addicted drug, much like how viewers are constantly drawn back to the couples. February has no shortage of dramas for your viewing.

The Synopsis (what I can gather from the net): Our main character Bai Luo Yin (Xu Wei Zhou) comes from a poor background, living with his father and grandmother. His mother is trying to remarry a rich man, coincidentally Gu Hai (Johnny Huang Jing Yu)’s father and wants him to live with them comfortably in the new house. Upon hearing the news of his father’s impending second marriage, rebellious Gu Hai runs away from home and transfers to Luo Yin’s high school. Eventually, Luo Yin moves into Gu Hai’s home, beginning the road of hilarity, acceptance, and love for both families.

Lin Feng Song as You Qi.

Second OTP. Chen Wei is like a puppy. He looks like Ma Tian Yu from the side!

You can watch Heroin on youtube subbed at j2skyj’s channel. Direct link to Episode 1: here. The whole series has around 15 episodes, with each episode about 25 minutes. Give it chance, folks!