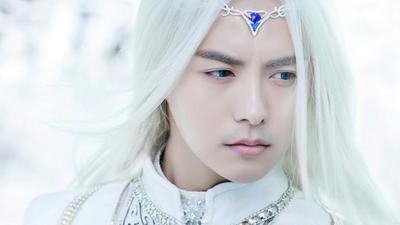 Finally something other than stills!

Some of the these stills have been revealed before… why so stingy production?

Quick Synopsis of the book I have written before: The story is about the Empire of Snow (Ice Tribe) and the battle between the two brothers for the throne. After a fatal war with the Fire Tribe, only older Bro, Ka Suo (William Feng), and younger brother, Ying Kong Shi (Ma Tian Yu), survive among the siblings. To hide the last blood of the Ice Tribe, the brothers are sent to the mortal realm for 30 years. There, Ka Suo continues to practice his power on a smaller scale. As an illusionist, he is able to create ice sculptures out of water and sell them to make a living.

The day they return to their kingdom, Ka Suo meets the first woman he loves – Li Luo, she’s a top sorceress of her generation. He asks for her hand in marriage but his royal father refuses to bless him because as future King of the Snow Tribe, his queen has to be a pure blood, and only mermaids of the Sea Palace are qualified to marry into the Royal Family. Without a leaving a trace behind, the top sorceress disappears, believed to have been buried under the ice bed deep in the Empire of Snow.

But what Royal father doesn’t know is…his older son does not want to become King. His younger brother, whose innocent smile bears an wickedness that can’t be described, desires the throne instead. In their world, power is measured through the length of their silver/white hair, and little bro repeatedly announces that he’s the better candidate for King because his power/hair has surpassed that of his older brother’s. When the astrologers try to read into Shi’s future, all of them have died, with the exception of one (Xing Jiu).

Above is only the outline of the novel, the drama will be making additions and changes accordingly.

I’m looking forward to her a lot. Lu Zi Zhen.