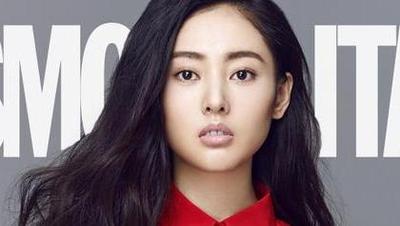 The hottest rising starlet on the majority of the polls nowadays is your one truly manly princess, Crystal Zhang Tian Ai. It’s always nice and overwhelming to rise so quickly with the right project at the right time. While the boys were pretty to look at, their acting left a lot to be desired (some are not actors themselves, to be fair) and she stood out like a shining gem. Her commitment showed.

Here she is for Cosmo in March.

And if you’ve been stalking Crystal, you might already know about her personal love story. They dug out her past dating experience with model-turned actor Li Zi Feng. It’s in the past so I’ll just post a few wedding pics. They almost got married but he was reportedly cheating and left her with a broken heart. She went through a period of hell afterwards. Gotta say, that definitely put LZF on my bad-boy radar but since it’s a personal matter between two people, I can’t point fingers at any party. Let Miss Karma do her thang at the end of the day. X)

They are reunited (how cruel) in the upcoming webdrama My Fair Lady, based on the novel My Friend Miss Chen Bai Lu written by Hai Tang. Playing the leads are Chen Yi An and Qu Chu Xiao, both raw in leading a drama series. Directing goes to Sun Miao Miao who directed the Chinese Version of Desperate Housewives called Pretty Housewives. Crystal will be playing a gentle and kind-hearted friend – the opposite of her character in Go Princess Go. The story sounds pretty generic to me but they will be adding more screen time for Tian Ai since she’s popular now. That’s life for actors.