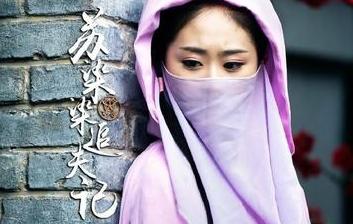 Time-traveling element? No problem! Male x Male OTP? No problem! Welcome to the world of webdramas. Lol. With the success of many webdramas, including the explosive underdog Go Princess Go, here are two upcoming ones to look forward to, both have horror and fantasy elements to them. The actors and actresses are fairly new as well. It took me a while to get a name matched to a face… and I still think I got them wrong somewhere. XD As I always say, new bloods is a breath of fresh air, always needed and welcomed.

I have ripped and uploaded the teasers as well. Enjoy! =D

========> First up is Shi Ling Lu (Wind Chimes, 示铃录), based on the novel Yuan Qi Zhuang Ling (怨气撞铃) written by Wei Yu. The story follows our heroine, Ji Tang Tang (Xu Jing Yuan), as she solves mysteries for the dead using her special ability and various equipments to connect to their realm. She was once a cheerful girl embraced in the arms of her parents, but those most beloved to her vanished (aka killed) after one night. She wanders from here to there, afraid of making friends, afraid of contacting relatives. Having spent four years surviving the cruel world, she has become an independent and resilient person, unafraid of killing. The male lead, Yue Feng (Meng A Sai), accompanies her throughout her journey. He’s described as upright and the man of all men.

========> The other drama is Su Ran Ran Zhui Fu Ji (蘇染染追夫記) based on the novel of the same name written by Yun Jia. The English translation could be called Su Ran Ran’s Husband Hunting Journey. Lead female and male lead are played by Yin Qi and Jin Hao, respectively. The ancestral grave of the Su has great feng shui; others bow and beg for sons, but they can easily have nine. When they wanted a daughter, Su Ran Ran is born. As the only daughter (her family is royal, and she’s the emperor’s niece), she’s treated and treasured like a princess, rendering her a bit mischievous and spoiled. To help protect her from her brothers’ bullying, she’s sent to Zhu Mountain (oh boy) as a disciple. Alas, she’s all grown up and the family struggles to get her (and her cousin) married. When she learns about a new potential marriage, she tries to run away but is caught off guard after accidentally poisoning a young man in white. Brought home, her potential partner arrives and to the side, he greets her with, “I don’t plan on marrying you, please drop that thought.” Rejected. It’s not like she wants to marry him anyway. She’s always pondering why they want to get her married so soon.

Now, are you ready for the confusing trailers with body possessions and demons?! I read the first few chapters but nothing crazy like the trailer and music video.

Her nine brothers. What a lucky girl (lol). They constantly pick on each other but she has the upper hand being the only girl.

Main OTP. Guy is Jin Hao. In the teasers below, he’s the one with the mask.

Her and another love interest, played by Sun Wei Lun.

Female lead with Su Huan Jun, one of her brothers.

Cute girl below is Zeng Meng Xue. I believe she’s the cousin.

Villain played by Lu Jun Yao. The talkative disciple in The Journey of Flower.