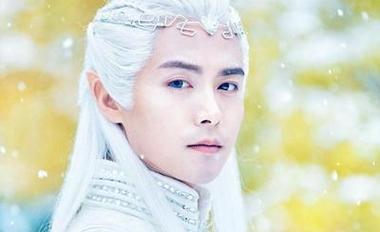 Ma Tian Yu posted the pictures himself on weibo. This dork. He wants to be a mermaid which is fine with me….because… I’m Prince Pirate of the Sea. *wink*

For more pictures and drama details (if you’re new around here!), please visit the drama tag: here. Briefly, Ice Fantasy is drama adaptation of the novel written Guo Jing Ming. It tells the story of two brothers in the Ice Tribe, the elder one (Feng Shao Feng) not caring about the throne, while the younger brother (Ma Tian Yu) uses his own unorthodox ways to help his brother. If all else fails, I’ll watch for the pretty.

Ma Tian Yu with his tail. 🙂

He’s so pretty!! Those eyes…

Her warrior look is much better.

OTP: Victoria and William Feng. Rumor of them dating is still going on with William being extra “touchy” on set.