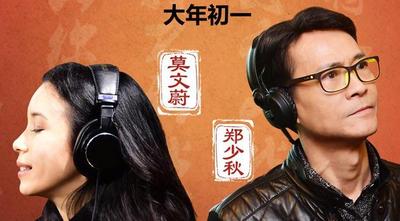 EEEEEEEEEEEEEE!!! I know many don’t follow or have interest in this movie but I do. They dropped the themesong for the movie sang by Adam Cheng and Karen Mok and it’s epic! I was brought back to the good old tvb days when their themesongs were carefully worded and well performed by the chosen singers. I’m literally still flailing right now! GAHHHHHHH! So good for my nostalgic heart strings!

But let me clarify that it’s a remake of the song You’re the Best in the World by Roman Tam and Jenny Tseng. Cookies for anyone who knows which drama it is under. The younger generation might not recognize, it’s okay! Lol.

Other cast members that were not presented at the press conference today are Kris Wu, Deng Chao, Show Lu, and Kitty Zhang. View pictures and trailers through the drama tag. The story is typical (love story between a guy on a pirate ship and a mermaid) so I’m here for the special effects and some good old humor.

The selfie stick is taking over the world. My friend just bought one! Let it out, do you have one? =P

Still glowing as ever, Karen!

The handpicked mermaid, Lin Yun. She reminds me of a younger Barbie Hsu…

“You’re the Best in the World” – Adam Cheng & Karen Mok

“You’re the Best in the World” – Roman Tam & Jenny Tseng

The Mermaid is produced and directed by Stephen Chow with him and five other writers – Li Si Zhen, He Miao Qi, Zeng Jing Chang, Lu Zheng Yu, Jiang Yu Yi – it hit theaters on February 8th, 2016.