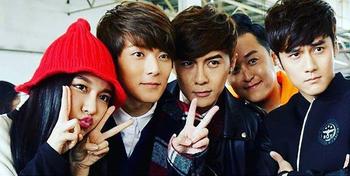 That is a lot of pretty in one frame.

Another modern drama with beautiful people is coming your way! The production team held two press conferences in the span of a few weeks with its main cast consisting of Jiang Jin Fu (The Legend of Qin), Eva Cheng Yan Qiu (Chronicle Of Life, Yun Zhong Ge), Danson Tang (Murphy’s Law of Love), and Cindy Sun Xiao Xiao (God of War Zhao Yun). The Adventure For Love follows Xia Meng Xun (Eva Cheng) and the boys as they try to find a missing relic to solve the mystery surrounding the three families.

Jiang Jin Fu. Heir to family business but is carefree and enjoys freedom. He has great survival skills in the woods, conquering oceans and mountains alike. To fulfill his father’s wishes, he joins our heroine in searching for a relic hidden away, hoping to dissipate the hatred and mystery surrounding the three families.

Eva Cheng Yan Qiu. She’s described as being both simple and unfathomable. A girl who doesn’t like bright-colored clothes and brand names. She is a bickering couple with Jiang Jin Fu.

Danson Tang. Elder brother to Jiang Jin Fu’s character. He has no interest in the family’s business but has a gentle side to take care of the ladies. Lol. He meets Wen Xin’s character and is completely head over heels for her until she tricks him, gaining the majority of his inheritance. Awww man, that is NOT how it’s supposed to go down!

Chen Xiang. Successor to another big corporation. He studies abroad in France and is described as a well-mannered gentleman. His parents divorced when he was little and he grew up loving, respecting and fearing her. He is our heroine’s fiancé and when he finds out that she’s slowly getting farther away from him, her heart belonging to someone else, he loses his self-control and wreaks havoc.

Cindy Sun Xiao Xiao. Kinda the ‘doctor’ person in the group with an unrivaled enthusiasm and great friendship with the heroine. She’s paired up with Chen Xiang. Whew! His days aren’t dark anymore.

Angela Chang in a mysterious role. She must be the mother of one of the two families, right?

Yvonne Yung. Wow, it’s been so long since I last saw her!

Booting Ceremony A Few Weeks Ago:

Another female character, Wen Xin, with an English nickname as Swan. Girl, no.

The ladies hugging it out. Aww, they look so cute!

Directed by Hong Kong director Jeffrey Chiang (Love Is Back, OB-GYNS, My Best Ex-Boyfriend) and written with fantasy elements by Xu Lei (The Lost Tomb), The Adventure For Love has 32 episodes and is slotted to air on January 20th.