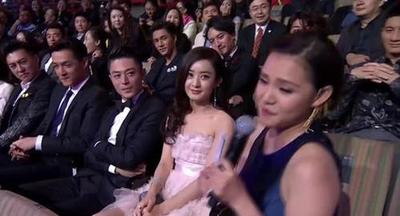 ^ So many pretty faces in one frame. When is this lawful?!

Finally an event where Li Ying actually attended. I was feeling dejected that she never shows up at these star-gatherings and now she is here! Yay! Everyone who came received some sort of an award so it’s really dividing the pork. I have difficulties translating some of the award titles. Lol. Please help this sister out if you have a better worded name.

This show can also be called Hu Ge and his OTPs. Dude has so many. =P

Angelababy in a fitting white dress with her always beautiful and always hydrated long locks. 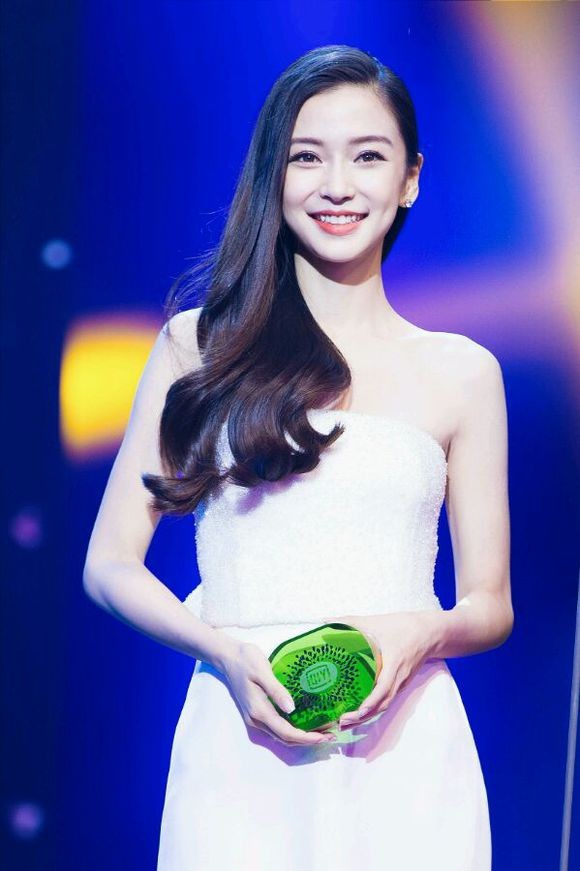 Angelababy and Boran Jing. Aww the two best friends (they started out around the same time was each other’s first onscreen kiss from what I read) here to snatch the Overnight Success Award. That’s what I’m calling it. They also confirmed their participation in the movie version of Just One Smile Is Very Alluring.

Yang Yang. Looking cute with his bowtie. Quite a few bowtie-wearers tonight,

Zheng Shuang and Yang Yang for Favorite TV Actress and Actor of the Year. She hurries to the stage without him. Ha.

Zhao Li Ying. When asked which actor she wants to collaborate with the most in the future, she answers Hu Ge. =D Her dress is cute and I love how dainty she looks with the badass one-sided long earring. I googled the dress and it costs over $4,000!! The cutest thing about her look are those polka dots heels. So refreshing and cute cute cute!

Li Ying and Wallace receiving the Most Welcomed/Liked Actor and Actress of the Year. One of the MCs and a frequent guest on Run Brother, Miss Evonne Lin comes by and interviews the hottest stars of this year, and she asks, “Miss Zhao, surrounding us are the men you have kissed in dramas before, do I need to list them? So which lips give you the most feeling/emotions?” She answers, “Professor He!” And he laughs on stage and I’m nodding my head off, good answer baby girl!! Then she asks whether the 3-hour long kiss scene with William Chan was NG-ed on purpose and before Li Ying can answer, she asks Papa Wu in the back row instead. But he confesses that he wasn’t there when the scene were shot so Evonne brings up another matter. “Last year you came as a single man…but this year….Haiz…why didn’t you wait for me?” Actually Liu Shi Shi already revealed at the press conference of Love Like This that the wedding will take place in Feb/March of 2016 and she’s waiting to be surprised by Nicky. 🙂

When they head onstage, Li Ying zooms past Wallace on her heels like she has no time for him. LOL. Another tidbit: when William who sits beside Li Ying goes up onstage for the award + performance, Wallace beckons her to sit closer (in William’s seat). That was nice of him.

Zhang Dan Feng and Jiang Xin taking home the awards for Best Portrayal/Presentation on the small screen. What? And Why is she wearing such a frumpy dress?!! But I like the Reds on Dan Feng’s suit, now if only the pants were longer!

Song Jia. Are we going directly to a bathhouse, Jia jie jie?!!

William Chan with an Idol Star Award. That golden earring is too much, man! =P

Yang Mi also in a dark red dress, winning for Film Star With Big Influence. I think it is cute on her.

Chen Kun for Character of the Year. More like hair of the year. Lol.

Japanese singer, Jin Akanishi for two awards: Most popular artist in Asia and Music of the year.

Leo Wu and his BFF Liu Hao Ran. The next HuGe-Wallace duo? They are onstage for the Most Welcomed New Actors of the Year. So cute!

Little Wu is taller than you now? My, my.

Bai Bai He and her flare pants.

Vivian Sung and her co-star Darren Wang from Our Times. She looks beautiful.

Saving the scandal man for last: Hu Ge. Yes, you, don’t give me that quizzical face!

Ready for his OTPs? Hand-in-hand with actress Yan Ni. They win the awards for Best TV Actor and Best TV Actress.

With Leo. It’s so cute when he places the cape on Hu Ge like he would do in Nirvana In Fire. Hu Ge’s face. Aww.

With Wallace. Evonne Lin interviews the scandal of the year between Wallace and Hu Ge, stemmed from the promise that Wallace made that if he isn’t married in five years, he would stay beside Hu Ge. Hu Ge responded awhile back, “In five years, I might not be single. But if I were, I will definitely look for Wallace.” Lol.

When she moves to Hu Ge, he’s like, “Hi!” Professor He suggests they use their acting skill to enact out a few scenes. The gifs are as follow.

1) Not liking each other (the boys move away, look at the smile on Jin Dong’s face, haha!)

2) Loving each other (Wallace puts his arm around Hu Ge and the latter gently touches his fingers lovingly.)

4) You both like the same girl (both look up at Evonne in surprise) and she says, “Me!”