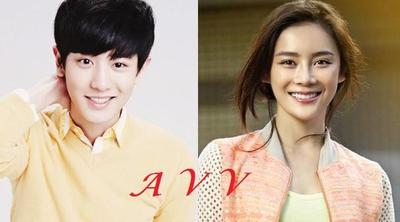 Well, if you were wondering how they would look like together, here’s your answer. The two met up a few days ago and shot some posters together for their new film, So I Married An Anti Fan, based on a Manhwa of the same name. The premise is about our heroine, a tabloid reporter accidentally revealing scandalous photos of the hero – a super star, and then gets labeled as his biggest anti-fan. I don’t know the exact storyline but from the title, they somehow get married down the line and there are supposedly some kissing scenes and a bed scene. Now that I have seen them together, they don’t look half as bad as my imagination. Yuan Shan Shan in reality is only five years older than EXO’s Park Chan Yeol.

Directed by Jin Di Rong and script-edited by Wang Yan, So I Married An Anti Fan begins filming this month for a summer release in 2016.