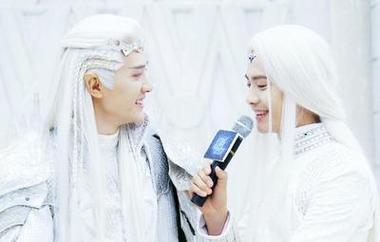 If you start seeing more banners of Prince Ray around, don’t be annoyed. That kid is taking my breath away with his white hair and perfect skin. Yesterday, the production crew opened up their filming locations to reporters and a few fans (not me…sadly BECAUSE I WOULD NEVER LEAVE!) They were filming a battle between the two royalties – Fire Princess and Ice Prince!

Guo Jing Ming is a peanut! He’s so small. Lol.

YOU’RE SO PRETTY. IT’S BLINDING ME.

Some stills of our female lead, Victoria Song. She was not on site during the opening. I do like her warrior look better than the pink princess gown.