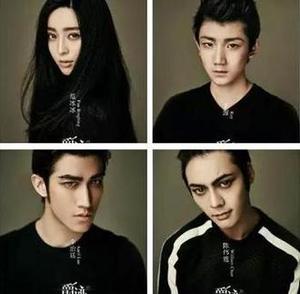 Either that or they are all getting a brain scan done. Maybe both.

I’m not even sure what the movie is about but it consists of many household names and rising stars of this generation. Based on the novel of the same name (written and now directed by Guo Jing Ming (Ice Fantasy), L.O.R.D: Legend of Ravaging Dynasties depicts the endless battles of four kingdoms as they fight for power and domination of the one ultimate realm. Family and friendship are two important themes. The question is…. which team is each of the cast member on?

They could have done better with the posters so it’s not repetitive for each cast member. Creativity people!