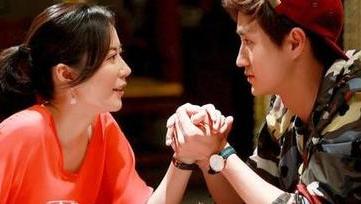 I always love it when the underdogs make a prime time debut. Some of you guys might remember Yang Le from My Sunshine and Back in Time, but he’s now a leading actor in an upcoming drama, Little Husband, with experienced actress Faye Yu (The Crossing, The Merchants of Qing Dynasty) in an older-woman-younger-guy relationship. After a failed wedding day, our heroine meets the hero and the two are instantly attracted – he’s young, energetic, and romantic, while she’s mature, independent, and stable. But blind passion can’t cover up the cracks fast enough because parental disapproval, pace of life, differences in values exhaust the heroine and she chooses to break up with him. When they meet again later, he has matured and is ready to give the relationship a second chance.

Our female lead Faye Yu. I haven’t seen her in a while.

Second female lead Alina Zhang (Ice Fantasy). She’s a model with a commanding presence in the series. With the arrival of a child, she undergoes major changes in growth.