On The Wings Of Love~ 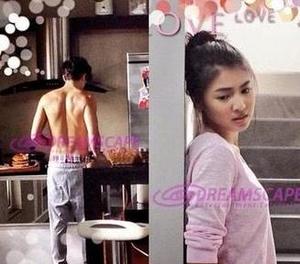 So now it just seems like I pop in here when there’s anything Jadine related to be had. This is a false assumption T__T I’m just too exhausted to watch things *pout*

Anyway, Yui showed me a new Jadine (read: James Reid and Nadine Lustre) show, and of course, it was the cutest thing ever. But apparently, frea isn’t feeling it, so today’s mission is to convince her (and you all) that YOU. NEED. TO. WATCH. THIS.

If you’re one of those people who are going (ﾟロﾟ) !(ﾟロﾟ) !(ﾟロﾟ) ! 100 EPISODES NUTTIE NO NO NO: In full disclosure, I literally watch ONLY the Jadine moments (and the recaps) so one episode takes me anywhere between 5-15 minutes depending on how many Jadine scenes are there. So this means this is a show that I can actually watch~ And if I can do it, so can you~

So what is On the Wings of Love (or OTWOL, as it shall now be called)? It’s a teleserye from the Philippines, currently slated for about 100 episodes of about 25 minutes each (barring the pilot). It’s basically the product of (what I suspect) were a bunch of fanfic writers going: Listen, dude, we need to make One (1) drama, where we just have fluff, and we need to use all these tropes.

And the director just said:

….and summary (courtesy of Balthyzars) : basically this girl Leah is goes to the U.S. bc she wants to work there/provide a better life for her family (her dad & sister & nephew). she promised a bunch of people important to her that she’s not gonna be a TNT (which stands for Tago Ng Tago, which literally just translates to “keeps on hiding” in english so i think you get the idea that it means illegal immigrant & that Filipinos have a weird sense of humor) in the States but her visa’s about to expire (oh no!) so her ex-boyfriend’s mom (this is an Important Plot Point) suggests that she marry a citizen to get a green card. at first Leah’s like “!!! but??? (to the tune of that Legally Blonde the Musical song) what about love????” but basically she’s out of options sooooo. AND THEN said ex-bf’s mom Tita Jack gets this incredible lightbulb idea and is like “why don’t you marry my nephew aka your ex’s cousin so that it’s not weird???? because that’s not weird at all???? ” the guy, Clark, also has his own Important Backstory but we don’t really have time for that rn. SO SHE MARRIES THE GRUMPY LITTLE F****R and at first they HATE each other like they keep getting on each other’s nerves like she throws a f****** cockroach at him but of course they have to pretend that they’re ~madly in love otherwise Leah gets deported and Clark goes to jail. and i’m sure you’ve read enough fanfiction to know how the story progresses from there.

So, here’re some of the tropes that one can see on OTWOL:

I swear this is diabetically cute!!! Why isn’t everyone watching this???

Ok, ok, you know what? I DARE you to watch this *last ditch attempt*

To watch and/or download with english subs, head on over to dramanice~ They have a download link under every individual episode’s video~

Credit for gifs goes to OTWOLgifs, BALTHYZARS (who has some hilarious text posts that I may have err… grabbed convincing material from, as well as some well-written pretty stuff), and FyeahKimmychiu

Give me lots of comments too, btw~~ Preferably about how I’ve wrecked your life with this show~~ I mean, it’s not like I’ve wrecked mine… not like I’m making this post secretly while I’m at work or anything *cough*

And if it’s alright with Kappy, we can make this a discussion post where we spazz about the show! READY, SET, GO!