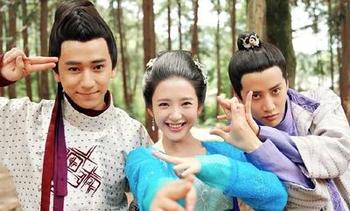 A Tangren production with their upcoming batch of youthful stars led by Jiang Jin Fu and Gulnazar. But if you’re watching Wu Xin The Monster Killer, you will recognize half of the cast members too. Green Hill Fox Legend consists of 6 supernatural stories and folktales about fox spirits and ghosts taken from Strange Tales from a Chinese Studio (or Strange Tales from Liao Zhai) written by Pu Song Ling, one of China’s gifted authors in spinning creative fictions with subtle humor and meaningful life lessons. I really loved the second season of TVB adaptation back in 1998 (I still have the opening and ending themesongs playing in my playlist! Old soul…here.) One of the stories was also adapted and many might recognize Barbie and Daniel Chan’s Chinese Ghost Story in 2003.

Jiang Jin Fu. He and Guli are main characters for the story Heng Niang and the others are Feng San Niang, Ying Ning the Laughing Girl, Hu Si Xiang Gong, Pavilion, and Chang Ting. Everyone looks great in their outfits! Quality materials right there!

Gulnazar. Is it me but this young lady is taking up a few lead roles under her belt?

Kiton Jiang. The lead in Perfume Woman with Han Dong.

This is simply breath-taking!!