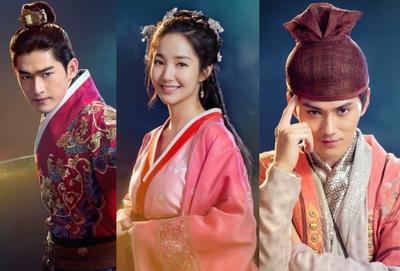 Zhang Han (The Four). I think he looks good. And could use some vacation time like Tang Yan. ;] A loyal guard who aids Zhu Di in his quest to become Emperor Yongle, the third Emperor of the Ming Dynasty.

Park Ming Young (Healer). She looks so cute!! Love her hair and style.

Hao Ze Jia (The Four, Legend of the Ancient Sword)

Lol. The majority of the cast has worked with Zhang Han in his other dramas, especially The Four!

Directed by Chung Shu Kai (Lady and the Liar, I Love Hong Kong, Adventure of The King) and Liang Sheng Quan (God of War Zhao Yun, Legend of the Ancient Sword) and written by Bai Yi Cong (Go! Goal! Fighting!, Feng Yun Legend), Braveness of the Ming is lined up with 30 episodes.