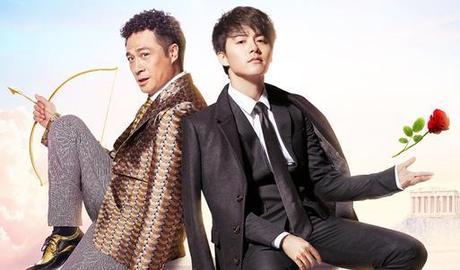 hahaha! The role reversal for this movie is just too cute. I’m sure you guys remember Hong Kong actor Francis Ng as the strict and principled Captain Tong from Triumph In the Skies 1 & 2, while Ma Tian Yu (or Ray) has made a name for himself as the cute, reliable younger brother in the industry, so to have them play against type is gold. Francis isn’t really a cupid like the posters suggest; he plays a tyrant CEO in a town with Ray as his serious and scheming secretary. When Francis learns that he is terminally ill, he decides to do something crazy to be remembered by…

Francis started out playing comedic roles in his career, but he’s more well-known for playing serious characters. His curly fringe in here is gonna kill me! Lol.

His lady love in the movie is Anna Yao (EX-Files, Fiji LOVE).

Ray and his perfect suits. Boy always looks good! Too bad he’s a villain, plotting the downfall of his boss!

Ray also has his eyes on the same woman as his boss. Not a good idea!

See what I mean?