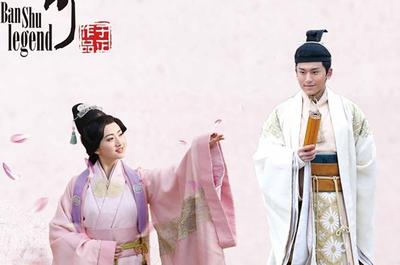 Ban Shu Legend is said to be the sequel to Zhao Li Ying’s Female Prime Minister since the main character played by Jing Tian is supposedly her niece who was separated from her parents as a child and grew up in the grasslands. To be accepted by her noble family, she enters the Palace, hoping to prove her ability and become an instructor at the Royal Female Academy. I can see the potential in Jing Tian, but her OTP man Zhang Zhe Han needs to rise up to the challenge if he wants to shine next to her blazing self. Lol. Real life couple, Li Sheng and Li Jia Hang, are not playing lovers. Awww.

The good thing is it’s English-subtitled! Yu Zheng trying to get on the good side of international fans?

I do NOT understand the excessive eye photoshopping in these pictures. Their eyes are beautiful, leave them alone!

Love this whole style on her.

Zhang Zhe Han. His character promises not to love anyone after his beloved (Viann Zhang) dies. Of course, promises are meant to be broken.

Can they be the next HIT couple?

Hey, you scholars! GET A ROOM.

Fu Xin Bo likes our empress dowager. That’s an easy way to off one’s head. *gulp* He plays twins. An Imperial Guard and a scholar.