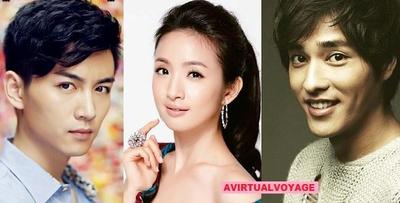 As previously mentioned in one of the C-News batches: Ariel Lin, Kara Hui, and Chen Xiao were invited to film a thrilling suspense movie last December (filming wrapped up in February.) The Mysterious Family is directed by a Korean director, Park Yu Hwan (Memento Mori) and revolves around a murder and the confusing dynamics of the family with Ariel playing the high school daughter (??!!!), Chen Xiao as the son, Kara as the mother, and Jiang Wu as the dad. Miao Miao, a carefree and bright-eyed student, encounters a night of brutal attack that changes everything about her routine life.

For those who don’t recognize him, this is Blue Lan Zheng Long. Looks like he’s part of the bad guys.

The ever so talanted Kara Hui.

I believe this is her first official project after tying the knot. She looks great! 🙂

Speaking of Chen Xiao, the lad is pretty busy himself, his modern drama with Yumama will happen after all and he’s also in the ancient drama, Twilight of the Empire, produced by Yumama. In the film industry, his movie, Bride Wars, with Angelalaby and Ni Ni, is scheduled to hit theaters on August 20th, 2015.

His photoshoot for Men’s Uno.