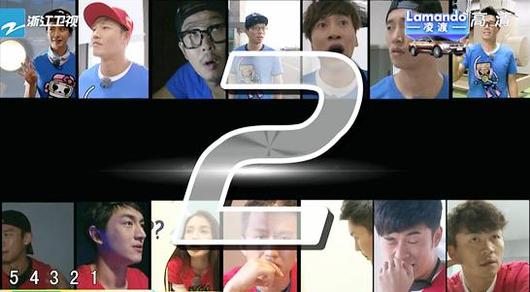 Are you ready to see some action between the newbies from Run Brother and the original members of Running Man?

Running Man members are brought to a massive building, unaware of what lies ahead.

Deng Chao’s face when he realizes they’re taking on the original members of Running Man in a nametag ripping competition.

While everyone is worried, Kwang Soo does a video message to Angela. LOL! This kid isn’t here to win, he’s here to fall in love. “You’re so beautiful.” XD

Wong Cho Lam isn’t here today so actor Lin Geng Xin, or Kenny Lin replaces him. But I don’t think it is a huge disadvantage though cause he and Ji Suk Jin fight one-on-one and both are weakling in their own team. LOL!

They keep going at each other for the whole hour and I’m just sitting here shaking my head at Kenny. He’s so bad and weak! hahaha XD He’s also unstable on his feet and we can tell immediately that the Running Man crew have more experience as they don’t bounce around and push the enemies away. They grab and pull.

I laugh so hard when Kenny and Suk Jin get so tired and decide a mini-break for water.

With his loss still fresh in mind, I’m not surprised our Sparta spots Jerry Lee immediately. The two exchange a firm handshake and more awkward smiles. Then Sparta locks him as his target and Jerry bends over, yelling, “No! No!” Michael happily runs down for a handshake and then flits away just as quickly, leaving Jerry at a loss. But since it’s so early, Sparta lets Jerry go.

The guys running around looking for Angela. hee! Gary is caught by Ji Hyo and she locks his hand in hers. Aww!! I miss my Monday Couple moments so much!

Jae Suk and Haha run into Angela and they discover a traitor in Jae Suk’s VJ as he blushes and films Angela.

Kwang Soo finally meets his love for the day. 😉 He asks, “Can you bobo (kiss) me?” LOL!

Anyway, let’s get to the real battles and elimination rounds.

Michael Chen is the first to be outed in Run Brother team after falling trap to Sparta-Ace skillful game play. Ji Hyo lures him into following her while Sparta waits for the kill. The victim is shocked. haha. “So quick, so quick.”

LOL Angela cracks me up. She has indeed done her homework. When Sparta finds Jerry again, she points at Kookie and says, “Yoon Eun Hye! Yoon Eun Hye!”

While Sparta battles with Jerry, Angela re-enacts the famous Dangyunhaji’s move on Kwang Soo. This kid is gonna die in the name of love.

Ryan meets Haha. In a distance, Gary eyes Bao Qiang and locks eyes with Haha. The two plan to attack dimple-faced Bao Qiang when he’s unaware but Ryan comes to the rescue. The crazy team work between Running Man members is so acute and spot-on.

Haha and Bao Qiang tumble onto the floor. Victory goes to Haha. I just love looking at Bao Qiang’s kind face. He’s so adorable, even when he loses.

Back to Sparta and Jerry. Angela conveniently rips off Kwang Soo’s nametag when his back is turned. She then runs off to laugh like a school girl. Poor Giraffe!

She opens her arm to console him with a hug. And the babo falls for it again when she jumps backwards.

Deng Chao in a dance battle with Haha before the real battle.

Sneaky Ryan joins the game and rips off Haha’s nametag. Then, Haha poses coolly for his loss.

4-way meeting with Deng Chao & Ryan VS Jae Suk & Suk Jin. You can see in the screenshot how clumsy Run Brother‘s members are when their hands land on the enemy’s back – they still need a second or two to find the tag’s location, compared to Suk Jin’s accurate landing on the Ryan’s nametag. Luckily, Ryan is a second faster and he clinches the win for team Run Brother.

In jail, the six weakest members – 3 from each team, shake hands. LOL

Jerry makes a bog mistake. In a battle with Sparta, never ever let me grab your shirt. It’s lethal move that will only end in his win. Not to mention, Sparta is much stronger and Jerry’s win last time was merely luck and opportunity. Angela tries to tear off Sparta’s nametag when he’s busy with Jerry on the ground but watchful Ji Hyo always protects her teammate’s back. 🙂 Angela then runs away after Jerry loses.

Gary proposes a one-on-one battle between Deng Chao and Yoo Jae Suk. Funny how he adds that viewers of the battle please proceed to the second floor. Lol.

Aww I love how honest the main MCs are when they hug each other, unafraid of foul play.

The brothers feeling sorry and apologizing for every slight brush. Deng Chao’s small nametag helps him a lot in winning this round because Jae Suk takes longer to get a firm grip on Deng Chao’s nametag. In a battle with equal-sized nametag, Jae Suk would have a higher chance of winning since he’s both strong and nimble.

Deng Chao takes Sparta away for their individual battle while Monday Couple deal with Angela and Ryan.

I’m so angry that the girls didn’t get to duke it out fairly! Ji Hyo is always hesitant in attacking female guests! GAH! It doesn’t help that Angela uses cuteness to its full capacity and Ji Hyo also falls prey. 😀

Low how Gary wraps his arm to protect Ji Hyo’s back. 😉

While the boys battle, Ryan quickly reaches out to rip Ji Hyo’s nametag.

Woah, attacking Gary’s lovely girl only triggers the inner beast in Gary and his fight with Ryan is the most intense one this episode. You can see the smoke and determination written across his face! No one touches my girl and lives!

Ryan has potential but he’s still rather weak. My eyes are glued to the tv screen now. Both men are ripping each other’s shirts with their claws! It’s so scary!

Now it’s two versus two. Angela and Deng Chao, with Gary and Sparta. Dang! If Angela is not in between the boys, this fight would have been way more intense. The boys are obviously not gonna shred girls like they do with guys.

Deng Chao and Gary tangle together and Deng Chao rips off his nametag. Gotta give it to Gary for the impressive battles!

Poor Sparta. He becomes a puppy being dragged around. But of course, when it comes to the pride of his team, Sparta doesn’t give in so easily, especially when he’s the last member of his team.

Although Angela acts cute and fluffy, she’s equally sneaky too. When cutesy doesn’t work, she does put up a fight. I want to see a real battle with her in the future.

Before Sparta rips off her nametag, he whispers, “Don’t hate me. I love China.” 😛

A supportive ending between the two teams. ^_^

I think we all expected the outcome that the originals with skills, strength, and experience were gonna dominate the newbies. Team Run Brother have a lot to learn. I hope they meet again to have some real fun!