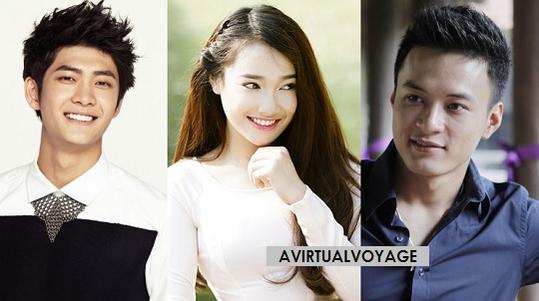 Interesting. Awkward. Trendy. The cross-country acting gigs among Asian countries are becoming popular these days. And I can never wrap my head around the whole situation with them not speaking the same language and relying on translators. What about the chemistry and the connection? I could imagine them skipping lines and speaking about different things in the same scene. Lol. Good thing these chosen cast members are experienced in that area. Latest on the list which has been steadily filming since August is idol drama, Forever Young, co-produced by Vietnam Television (VTV) Film Center and CJ E&M Pictures. Officials stills and a trailer are dropped below the cut.

By now, whenever I see a group of young cast members, the premise basically says the same thing. About dreams, obstacles, and love. Our female lead is a Vietnamese student studying abroad in her favorite country, South Korea. A more accurate description would be a Kpop Fangirl. heh. 😛 Of course, she meets another Vietnamese student and a Korean student/idol. Darn this girl, where do I sign up?

Our enthusiastic Kpop Fangirl is played by Vietnamese actress, Nha Phuong. She’s one cutie pie. She has filmed in Korea before, and played Ha Mi on the set of weekend drama, Wild Chives and Soy Bean Soup: 12 Years Reunion this past year. I did not watch that drama so no comments on her acting.

Her wardrobe is arranged by Korean stylists.

Playing one of her love interests is Korean actor, Kang Tae Oh. Some would recognize him in the same actor group as Seo Kang Joon, 5urprise. He was also in a couple of Kdramas, namely Twenty Years Old (tvN) and Miss Korea (MBC).

Girl is living the dream of every fangirl. hee!

The other male (don’t know who is the first male lead here), is Vietnamese actor, Hong Dang. This is not his first time involving in a cross-country acting project. Last year, he was in a film produced by Vietnam and Japan called The Partner with Noriyuki Higashiyama and Takei Emi.

Here he is taking pictures of our leading girl.

Main leads together. Oh, the gorgeousness of the background…..