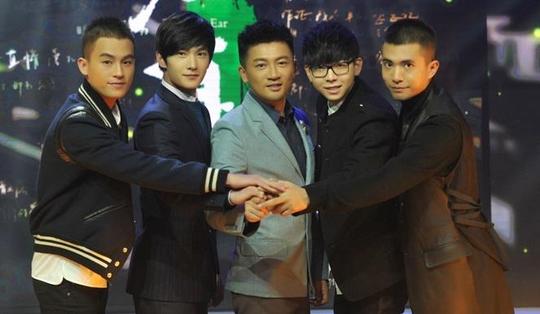 Three posts in one day? Who’s the bomb now?! ME. Well, I have work the next two days so I’m just gonna update consecutively knowing that I’ll be too tired after work to do anything. You ladies have fun with all the pretty. Following the footsteps of actors-to-directors (Deng Chao, Ruby Lin, Zhao Wei, etc), Alec Su‘s movie adaptation of popular novel, The Left Ear, written by Rao Xue Man, will hit theaters in early 2015. A press conference is held today in which the four main actors, posters, and a trailer are introduced to the audience. However, the face of our female lead is hidden/excluded in ALL promotional materials. This is a first.

The writer, Rao Xue Man, is known for writing heart-tugging love stories surrounding teenagers and The Left Ear is described as a painful love story. Our heroine (played by Chen Dou Ling) is a 17-year old high-school student with a weak left ear who has a crush on a quiet boy, whose girlfriend doesn’t really love him that way. Errrr….

Our proud director worked very hard. Writer Xue Man reveals how serious and dedicated Alec was throughout the filming. Two weeks before filming began, he got so upset when one line in the script wasn’t revised and printed timely. Alec responds that slow progress puts immense pressure on him, but when pressure becomes too big, he had to change worry into joy.

Main character played by Oho Ou Hao. You might remember in Temporary Family with Nick Cheung, Angelababy, and Sammi Cheng. He also starred in a drama called Song of Vengeance. Unfortunately, I do not know this 22-year old kid. He just looks like a gangster to me. LOL.

Yang Yang. Our female lead has a crush on him.

His character dates a girl (Sandra Ma) who *spoiler: later dies in the story…..* And the person she truly loves is Oho Ou Hao’s character.

Why so kute YY?

Actor Hu Xia. Female lead’s cousin, who also carries a torch for her…