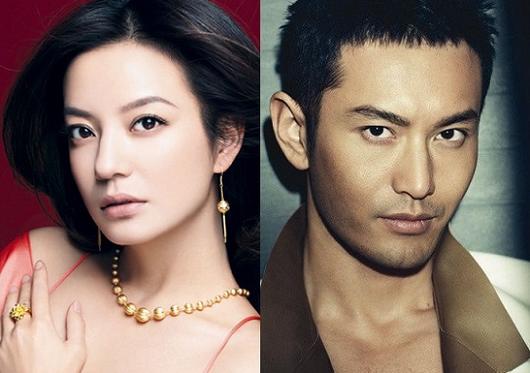 Then I read….for a film.

A girl just can’t have a perfectly round cake huh? Gotta give me 3/4 of it?

Well, well, well. Beggars can’t be choosers, I guess. While it is the first time Vicki will be collaborating with long-time friend, Huang Xiao Ming, it’s the third consecutive time with Tong Da Wei in the past year. I’m beginning to think our Cat Daddy comes attached to Tiger Mom in the contract. Lol.

The movie is tentatively called Invade Hollywood, and the crew has begun filming their American scenes in Los Angeles this past week. GAH! Nearby fans, please track down this trio and update me! How do they look in real life? The story is said to focus on the life of Chinese people trying to make a life in the glitz and glamuor of Hollywood. The OTP promises lots and lots of romantic scenes. Kay, now we’re talking!

Photos released by fans and the crew:

Looking straight into the camera.

He ain’t ashamed of it. hehe.

I can’t imagine them completing a scene with so many people around. Man!

Co-produced by both China and US companies, the directing is given to Justin Lin (Fast & Furious 6). Expected release date: Mid 2015.