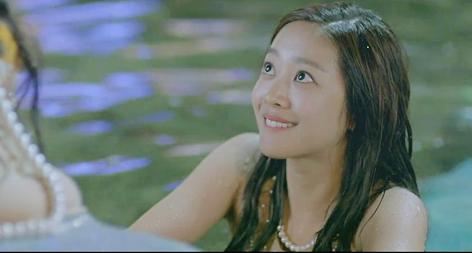 I’m in my drama-binging mode so if you see a slew of first impression posts, don’t be alarmed. Surplus Princess is quite out there and absurd in some ways, but it’s entertaining so far, ad requires little to no effort from your brain to make sense of things. Just go along with it. The heroine, our mermaid princess, is adorable, and it helps that she’s played by someone appropriate in age, and pleasing to the eyes. It’s only 45 minutes so the hour goes by really quick.

Meet our hormone-driven 18th princess of the mermaid family, Aileen (Jo Bo Ah), as she professes her love for the human world – online shopping, celebrity gossips, and drama watching! She loves them all! Especially the technology in the item she’s holding – a cellphone! I’m not sure how she came to acquire the phone but I do have a theory; a girl who goes by the name of rose throwing it away in an attempt to forget her adorable man-child boyfriend. She even shows you how she charges the thing. It’s waterproof, btw.

Current living arrangement? Swimming back and forth the infamous Han River. Why? Because that’s where her crush, Kwon Shi Kyung (Song Jae Rim), works. He’s a chef at a famous restaurant that resides by the river. Confident, skilled, and good-looking.

But Aileen has her eyes on his perfect apple butt. She yearns to grab a hold of that thang! 😛

You know the saying, “One apple a day, keep the doctor away!” Our princess learned well.

Well, here’s her chance! He slips and falls into the said river after seeing her head and tail. She seizes the opportunity for a good kiss. The excitement on her face can’t be hidden.

And who would have thought, he responds to the smooch readily, entrapping her in his arms. She screams, “YES!” Lol.

Then her hand travels down to the desire of her heart: his apple butt and gives it a few squeezes for good measure. Hey, she might not have another chance!

Making out before he’s rescued by someone Aileen refers to as a witch. hehe.

That witch is Yoo Jin A (Park Ji So), and she’s about to move out of the house, where she’s been living with her boyfriend, Lee Hyun Myung (On Joo Wan), and a group of nerdy guys.

Meanwhile, Shi Kyung broods in his shower, wondering whether that steamy kiss was a dream? He lost his phone in the waters and receives a mermaid scale from the cleaner, having found it in his pocket.

The phone is with Aileen of course, and she’s sitting on a rock somewhere, trying to crack the code to his phone. She does eventually, and defends her action. “It’s not invasion of privacy, I’m just trying to find the identity of the owner.”

She follows his blog and finds out that he’s looking for the person who saved him AND his phone. Moreover, he’s invited to the Summer MAMA’s party. Her eyes light up. She needs to attend the party!

Business first, she needs to become human. So she seeks help from her sister, the 17th princess, Sevlyn. A mermaid who’s always drunk after her trip to Russia. LOL

Just look at all those beer and wine bottles.

Aileen pleads with puppy eyes for a way to become human. Sevlyn is reluctant and asks, “You want a one-night stand with him?”

She knows what she wants, “Why not? I love him.” Aileen makes one last offer: expensive wine.

She relents. Deal. (Lol, the accessories on her head.)

Off Aileen goes to the mysterious stream where the legendary An Ma Nyeo (Ahn Kil Kang), hangs around. He’s a man no less! And refuses her, revealing that he was the midwife who brought her to this world. But nope, he doesn’t possess such potion and grips his pocket suspiciously. Yea, we believe you.

On the other hand, we return to the witch and her boyfriend. She unpacks her luggage and he inches closer, hoping for some sexy time. She makes a face but Hyun Myung doesn’t get it. Her mother arrives at the door and they scramble to hide him….in the kitchen cabinet.

The conversation takes an ugly turn because her mother wishes that she would dump her unemployed boyfriend. The reason she wanted her daughter to move into this beautiful building is because of all the single eligible men. Hyun Myung drops his eyes and mouths to Jin A that he’s okay. Aww, poor kid!

Not for long before he opens the cabinet and greets mother with a sheepish smile.

Hyun Myung checks his phone on the bus, hoping that Jin A would text him. She doesn’t. What a heartless girl!

At home, he receives multiple sour texts from one company he applied to, which all say they’re sorry he didn’t pass the screening process.

But one final text asks for an interview! His flatmates are equally excited!

They give him tips and this one guy named Big (the tall one), tells him to be confident, “You know how 2NE1’s CL looks so cool? She’s always singing ‘I’m the best! I’m the sexiest mama on earth!‘ and that’s how we’re all convinced.” haha!

At her new building, Jin A pretends to run into Shi Kyung and attempts to conversate with him. He gives her a cold reply, before apologizing for his lack of manners. Turns out it’s Jin A who wanted to move here after seeing Shi Kyung checked in a few weeks ago.

Giving in first, Hyun Myung calls and informs Jin A about his interview, and she encourages him for a few seconds before abruptly hanging up, because her target, Shi Kyung, is walking towards her direction.

Shi Kyung is so random, telling Jin A that he liked the perfume she used the other day. She smiles.

Our princess is hell-bent on going to that Summer MAMA’s party and nothing could stand between her and her destination. She pleads with Ma Nyeo one more time, even giving him wine and expensive pearls. He takes everything and gives her one advice: “Do you know how dangerous the human world is? Trust becomes cons, and true love becomes betrayal. So don’t even think of becoming human.”

Yea, keep putting your hand there…no one will know….

Done playing the nice girl, Aileen pulls him into the waters and dips him a few times before grabbing hold of the potion.

He screams but it’s no use. She gulps down the whole potion. Pink mist surrounds her and jolts her into the sky, where her tail becomes two legs.

She’s dropped to earth and with the terminator’s theme playing in the background, we see her crouched on the ground. Nekkid?

Kappy: Jo Bo Ah was the lucky female lead in Flower Boy Band and if I remember correctly, I didn’t like her character or portrayal one bit. But she’s adorable in here with equal amounts of sassiness and naivety. I’m curious to see how she fairs in the human world. Will she become the doormat or rise above that level with her daring attitude?

The first character beat for me is with Hyun Myung. It has to do with our status as unemployed individuals, though my job hunt has only just begun, I can empathize with a soul who’s been rejected so many times and found myself rooting for his success. It does help that his girlfriend is a gold digger.

Hyun Myung’s flatmates are quirky and nerdy, and I was grinning from ear to ear of how supportive they were.