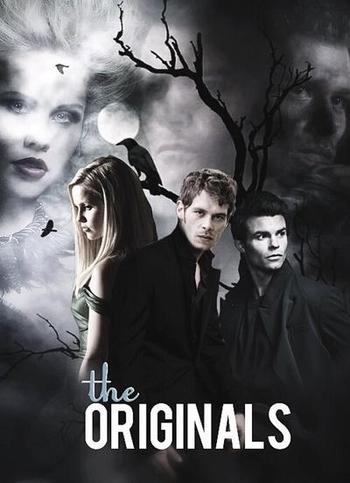 I have caught the flu! And weeping about a character isn’t helping. THIS IS KRAPPPPPP!!

For those who don’t know, The Originals, is a spin-off of The Vampire Dairies. Why? Because they are awesome and badass, deserving of their own show. FYI, I have read the books TVD, but have never seen the show itself, except to seek out clips of the Original family. They are the first vampires to grace Earth, hence the name, created by their mother, one powerful witch, to protect them from the neighboring shape-shifters, wolf families. The seven siblings, two who have passed away, in order of eldest to youngest, is an unnamed older brother (dead), Elijah, Finn (dead), Niklaus, Kol (dead), baby sister – Rebekah, and Henrik (dead).

The Originals focuses on Niklaus, an original hybrid (his mother has a brief affair with a werewolf), hence his debilitating relationship with his stepfather, Mikael, who spent years and years torturing, shaming, and abusing the poor kid. But he’s dead in the hands of the aforementioned. The other two siblings include Elijah and Rebekah and they made a promise to be there for each other, always and forever. Which is a darn difficult promise to have with someone like Niklaus. He lusts after power, domination, and loyalty. And yet when loyalty to his siblings crosses path with his road to domination, he has no problem abandoning them, knowing full well that they will forgive him. A cycle that repeats itself over a thousand years.

Episode 14 through 16, centers around the ultimate betrayal that Rebekah did to her stepbrother, Niklaus, in 1919, the year when the three siblings have finally settled down and built a house in the French Quarter of New Orleans. She fell in love with a boy Niklaus raised, Marcel. And in her attempt to save him from death, she signaled their father to New Orleans, hoping to chase away Niklaus. Both are not nice people, but the key difference between Nik and Rebekah is that she regrets her actions, while he’s high and mighty, and can do no wrong. In conclusion, Niklaus is a horrible brother, he lets his paranoia and power-driven personality control his baby sister, destroying her chances at happiness, again and again. Whenever she finds a scrap of affection from any man, he would do the honor of killing that said man, citing reason that the man isn’t good enough for her. Well, well, well, who died and made you Judge, Nik!? When she retaliates, he daggers her, and in layman’s terms, that means she’s sent to the coffin to sleep for x amount of years until Nik thinks it’s time to wake her up. And this vicious cycle of daggering continues decades after decades, driving Rebekah nuts.

Well, Nik, maybe the reason why your stubborn sister doesn’t learn is because you never let her find closure. You always decide for her, robbing her the opportunity to fully understand love and betrayal. YOU are the reason why desperation fills her mind, so when any man throws her a crumb of affection, she holds onto it tightly and blindly. Niklaus was a total baby in episode 14. This is not to say Rebekah is a nice person. Because she’s not. Some would call her a B****, but she’s a B**** you can’t help but love. Yes, I do think she deserves the wrath of the witch she killed (such gruesome death!) but she definitely doesn’t deserve Nik’s fury. Then the writers somehow redeemed him in episode 15 by showing the gentle side of Nik, how he carried Bekah away from harm, strengthened her with his own blood. The flashbacks are wonderful.

An MV about Marcel and Rebekah.

To be completely honest, I hate Marcel. When he showed Rebekah the castle drawing that he has in mind for their future, I was rooting for them. However, he’s not the right man for Rebekah. She needs a family man, someone who would always choose her over power, someone who encourages her to grow and change. Marcel always picks power over her. Even in episode 16 when she’s finally released from Niklaus’ grasp, and free to do whatever she likes, he still didn’t choose her. I was beyond furious with this man.

Klaus + Rebekah MV – You are the piece of me, I wish I didn’t need.

What a beautiful mv, visually painting the twisted relationship between the two siblings. Episode 16 showed us why Niklaus and Rebekah are the closest. When clips of baby Nik comforting baby Bek during the thunderstorm by handing her a wooden toy, I was bawling because he was a beautiful, innocent kid. Which is why his change to a man of selfishness and wickedness frustrates Rebekah, and she rightfully asked what happened to that little boy she once knew. Tearfully, Nik answered that their father had ruined him and Rebekah added sadly, “He ruined me too. That’s what you forget.” Oooffff.

At the end of the day, Rebekah is a living reminder of Nik’s humanity, for she is the one person who has witnessed the best and worst sides of his personality. The sweet child and selfish adult.

One thing that I liked in The Originals is the theme about family, about Niklaus’ redemption, about fixing broken bonds and living with it. So when Rebekah’s betrayal was brought into daylight, I was excited because exposing the truth is a great way to begin the process of healing. But I cannot believe that episode 16 marks Claire Holt (Rebekah)’s last episode as a series regular. When she drove away in her car, I thought that Nik might be sitting on a street pole somewhere, ready to jump down and hug her, assuring her that she can stay because this is their home. Nope. She continued to drive off, a smile slowly emerging on her face because she’s finally freed from Niklaus. I was happy for her  because I thought she’ll come back in a few episodes to help deliver/protect that baby. Then I came on twitter and read the shocking news of Rebekah’s exit. FOR REAL!

It made that last scene so much more powerful and I started to cry because I have bonded with Rebekah and she’s my favorite female character, one who can hold her own among the men in here. Let’s see….I have no idea what Cami’s deal is, a psychologist analyzing Davina’s back-to-life depression? Boring. Hayley is fine but she has nothing to do but pouts her lips. And on lucky days, she gets to see Elijah’s abs.

Rebekah Mikaelson Mv ►The girl who loved too easily.

Perfect music video for an awesome character like Rebekah. *sobs*

If it was the writer’s decision to cut her out, like the articles stated how Rebekah’s storyline “advanced in such a way that she was no longer needed as a regular.” I called that KRAP!!! I still need to see them heal and work through these issues. I want to see them fight on the same side to protect their home!! Not running away like a century before, but staying and fighting together, like a family. Always and Forever. They, the arrogant originals, can overcome this betrayal! Rebekah’s story can’t just end here. She has a lot of potential. And if it was Claire’s choice to leave, I call her coocoo pie on coocoo puffs. Girl is nuts!

Now it makes sense why the baby is a girl. They’re transferring Rebekah’s storyline over to her. They all believe that having a baby and being a father will redeem Nik. It makes sense. But it’s so messed up for me as a viewer, losing a beloved character and a meaty storyline. To me, Rebekah represents humanity, Elijah represents stability, and Klaus represents spontaneity. Strongest when they are together. How could the writer kill this lovely arc?!

One of the best lines in episode 16 was from Rebekah. And it’s a sad revelation. “Centuries later, each of us is broken. You with your anger and paranoia. Me with my fear of abandonment. And poor Elijah. He dedicates himself to everyone but himself. We are the strongest creatures in the world and yet we are damaged beyond repair. We live without hope, but we will never die. We are the definition of “cursed,” always and forever.” OOOMMGGG!!!

Now tell me how I can continue without Rebekah?! It’s not the same!!