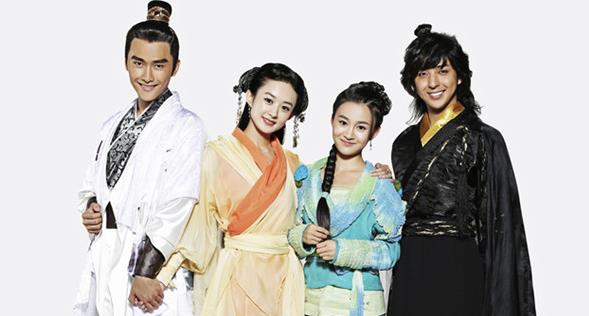 Zhao Li Ying continues to be on fire with project after project. News says this one is already done filming and she has already started on a new drama. This girl doesn’t sleep, as evidence suggests. How did she find the time to shoot The Palace, in between all the promotional activities and filming schedules? Definitely one of the break-out stars of this year – the other half is obviously her reel boyfriend, Chen Xiao. 😉

The premise revolves around two brothers of the Chu Family. The younger brother, Chu Tian Bao (Kim Ki Bum) is adored by the father. This adoration doesn’t go unnoticed by his jealous older brother, Chu Tian Xiang (Zhu Zi Xiao). While Tian Bao is care-free, mischievous, and fun-loving, he carelessly leaves opportunities for his brother to attempt murder. Coming into the picture to further set the brothers apart is the beautiful daughter of a minister, Yang Ruo Nan (Zhao Li Ying), who is also their childhood friend. She has a weak spot for Tian Bao but is betrothed to the older brother. On the other hand, Tian Xiang harbors strong feelings to possess her. Tragedy hits Tian Bao, thanks to you-know-who, and he develops amnesia. Saved on the brink of death, he meets and falls in love with Mang Xiao Die (Chen Yu Lin), a kind-hearted apprentice of a herbal doctor.

Elder brother spying on his flirtatious little bro, waiting for the chance to hunt down the bird.

He ain’t happy all the girls fall for the his incapable, lacking brother.

Chu Tian Xiang’s love interest is Yang Ruo Nan. And he’ll use any method to obtain her.

Is it wrong that I ship these two? The trailer shows him being creepily obsessed with her. To the point of violent kissing and spilling blood.

Zhao Li Ying has so many hairstyles in here. She looks very pretty in most of them.

This drama is set for 30 episodes and plans to premiere late this year or early 2014.