A festival packed with stars in many Asian countries. But it’s the couples + a few favorites that I’m interested in. Some are reel, while some are REAL. Are you past the guessing stage? Wedding bells soon for any?

This year’s hottest onscreen couple is definitely them, hot off their drama Female Prime Minister.

Dude, are you ever going to smile?

Cheeky fans made their picture into a wedding photo. (See they hate the yellow too!)

He finally smiles during the interview:

Next up is real life married couple: Christopher Lee & Fann Wong. Aww. If I remember correctly, they got to play the Singaporean versions of most wuxia series.

Another real couple. Feng Shao Feng sweetly smiles and holds his girlfriend, Ni Ni‘s hand, through the walk. At some point, he pulls her close for a tease. 😛 I’m happy for you man!

His former co-star, Yang Mi, appears without her boyfriend, Hawick Lau. He’s there but they didn’t go together.

Uhhhh, Errrrrrrrrr, what happens to Queen of Fashion Ady An? She’s dressed for a picnic below. Her make-up is washed out.

(Even the girl next to her with the fan design on her chest is getting attention from me.) 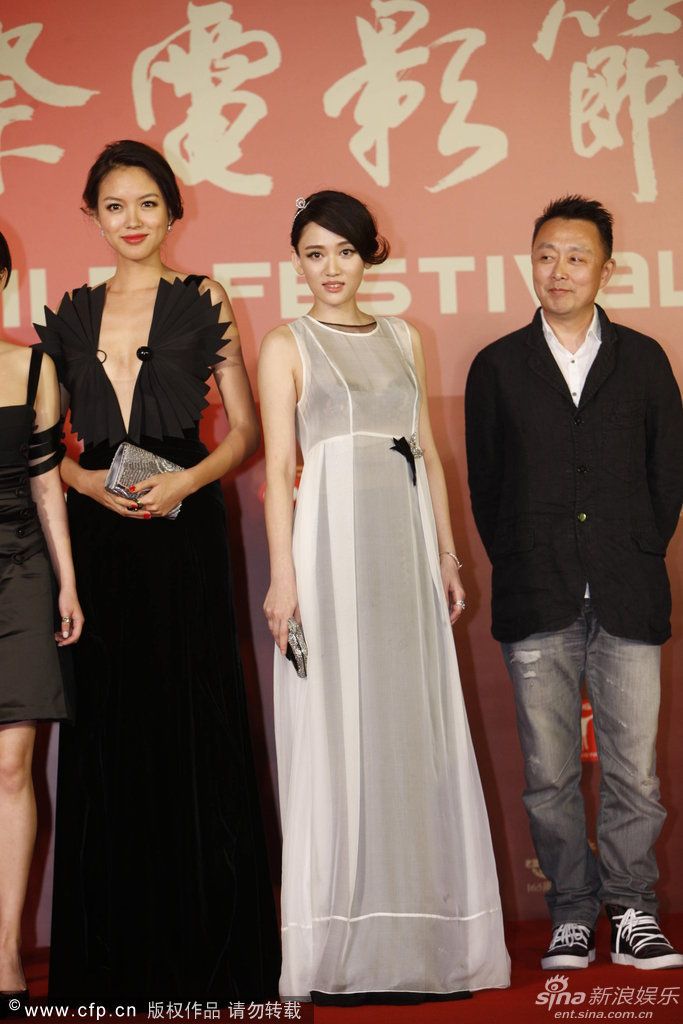 And somehow Peter Ho trades spot with the fan lady.

Her tail is a bit long….

She isn’t a big fan of teeth-showing. heh.

And for nostalgia’s sake:

Donnie Yen, Chow Yun Fat (!!), Aaron Kwok (he looks like an old man now, the cartoon character who’s always puffing cigarettes? remember?) Andy Lau is also there (as an MC?) and he looks good for his age.