Keane: Miki Honoka resembles Ariel Lin the most out of all the actresses! Who’s totally agreeing with me? I wonder if she researched Ariel’s acting before she started filming this 2013 remake. Finally, a show which has a real teenage high schooler acting as none other than… a high school student. This person is Miki Honoka, who blew out her sixteenth birthday candle just last month. Happy belated birthday girl!

I watched the first four episodes and I love it so far. There are a few LOL(!) moments so I’m grateful for those. I surely need a lot of comedy in my life ATM. What else?… so far, I can’t really enjoy the OST or any bgm for this show, and that’s a real shame because the Taiwanese version (It Started with a Kiss) really gave out a great collection.

I’m anticipating a wedding scene to check if this couple will cross-dress. That scene is like the best part about this drama, LOL, despite derailing the story off a bit from its original (which I merely skimmed through because it couldn’t captivate me) or anime (of which I so-so love) version. The only part where I couldn’t fully enjoy the Korean version (Mischievous/Playful Kiss) is for this fun scene was omitted. Pfft, Korean idols and their protective images. Uhh, and they all wonder why there’s a huge fan-cult for TW’s OTP. Key word: FUN = ISWAK. =p

Keane’s final words, *happy dance style* I love-love-love-love-love-love the finale. I was totally giddy all the way through despite a few tearjerkers for Kin-chan. Miki Honoka looks so pretty in Kotoko’s bridal dress that I had goosebumps all over. I was totally a goner when I saw Furukawa Yuki’s side profile sitting in Naoki’s ivory tuxedo. He’s so HOT! Even with the messy hair. You’ll see what I mean. I can’t wait for his next project, another manga adaptation, in a movie end of the year. Definitely a MUST WATCH for all Itakiss fans. HURRAY!!!

The pic below’s a teaser not the actual outfits on Naoki Irie’s & Kotoko Aihara’s wedding day: 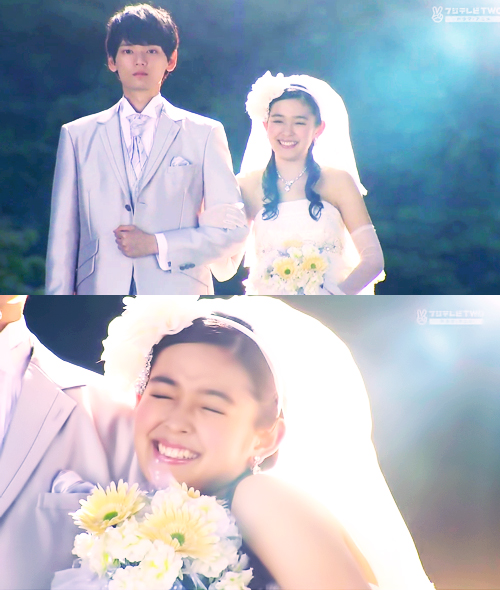