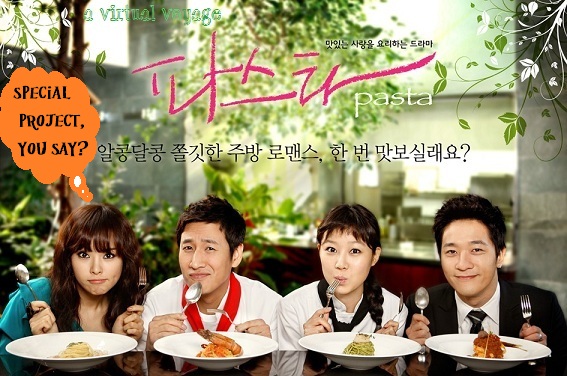 Team Italy vs. Team Korea
No matter what country, cook the show al dente with a drizzle of LOVE. Si, va bene.
We’re heading back in time. This show reached its third year anniversary. Not quite a “special project” however some late comers joining its fandom had requested this, and being I’m currently in the mood plus I finally found my special stash of discs… so here it goes. Show me your love so I’ll continue uploading more episodes till the very end. Low traffic rate yields cease/drop of project. You are forewarned.

Keane: Okay, give me a show of hands here who is watching this one for Noh Min Woo? You know you have some withdrawal from a certain drama?? Gah, I haven’t finished Full House 2 but I get whiplashes from the boy-on-boy kiss scene with Park Ki Woong.

I most likely WON’T be reupping this one Drifters. Be kind and donate mirrors. (✿◠‿◠) Good karma goes a long way. (◠‿◠✿) And I already stated above, if this show’s download rate is low then I will drop this special project.