If someone were to ask me the magic of this version, I would say the magic lies in the charming supporting cast. That means minus Oguri Shun and Horitaki Maki, everyone else was spot on in their characters no matter how ridiculous and illogical the scripts asked of them. Don’t complain since they warn you about it in the 1st episode. Suspend your beliefs and enjoy the view. 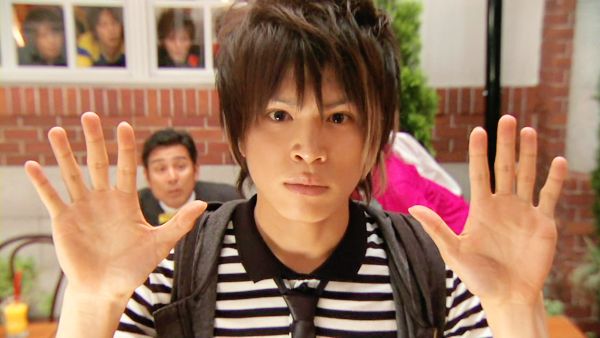 Sano: I’m gonna sulk for the first half of the drama! My ankle was injured but that’s not the main reason why I quit high-jump. Mizuki shouldn’t know this.

Mizuki: Oh no! My super idol quits high-jump because of me! Me! Clearly, there’s only ONE solution to solve this dilemma! I’m leaving my high-school life behind and join an all-boy school! AM NOT A STALKER! Just a supportive FAN! That’s the foundation of love!

Writer: Remember, your hair must be short. That’s the only requirement to BE a boy. Your soft voice is fine. Cause the boys are dumb.

Mizuki: What about my growing curve?

Writer: Let’s not flatter yourself kiddo. Your acceptance to the school promises ensuing hijinks!

Kaptain: Uh, sad to pop your bubbles, Writer. The boys here don’t need additional stimuli (Mizuki). They don’t sit around and wait for Crazy to come. They bring insanity to the table!

Sano Izumi is played by everyone (mine too)’s favorite actor, Oguri Shun, and I’ll say this – he was pretty much sleepwalking in the first half of the drama. I didn’t see life in his eyes until episode 6/7 when he began showing signs of concern in regards to the blossoming friendship between Mizuki and Nakatsu. Needless to say, Sano is one of my least favorite characters. He’s the popular kid at school, however introverted he may be, a champion in high jump; someone who isn’t worry of being friendless because other students swarm around him all day and night. His character design is the type I dislike because the connection doesn’t work both ways. Whenever he’s in trouble, countless hands would offer to help and yet when it comes to the strong bond shared between the classmates, I didn’t see it from him. Thus, my indifference towards Sano is due to his lack of involvement with the students on campus. Heck, his friendship with Nakatsu was barely there.

Some moments where Sano’s not busy being a grumpy couch: 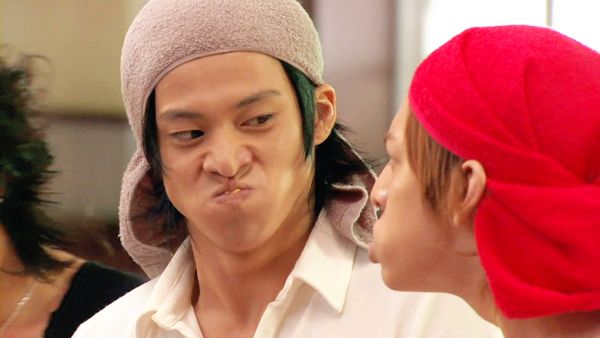 Thanks to Nakatsu, Sano isn’t completely boring in my book. He finally has someone to play off with.

The Maid & The Nurse: Front View

Horikita Maki portrayed Ashiya Mizuki and the acting made me wail in despair. Oh Maki, Maki. I adore you, I really do. Ever since I saw her in Atashinchi no Danshi, I loved that she doesn’t overact. But apparently, that has become a dangerous trait because her characters are usually unmistakably her, the star everyone loves for being proper and quiet. I found myself restraining from grabbing her shoulders and screaming, “Bring some life into your character!” It’s fitting in Nobuta wo Produce where she portrayed a lonely and cynical teenager. It’s not a sin to be a boring person in real life (she said so herself). However, as an actor, she needs to immerse herself in the role and bring the paper personality to life. If she can’t bring chops to the acting plate, prepare to be served cold on that plate instead. Harsh, but true.

The other problem is…she can’t emote. She can’t make me feel for her characters (unless she’s being bullied and I’m manipulated by the situation, not her acting). It’s the same case for Mizuki. Maki is flat and bland in this role. She didn’t even try to act like a boy, which is essentially the source of comedy for her own character. Is the original heroine in the manga this dull? Because in every scene she was with another actor, 99.9% of the time, I was staring at the other actors simply because they breathed life while she was occupied being the stiff Maki. The other insignificant .1%, I was observing the trees, birds, and you know, the environment. In short, her character just doesn’t stand a chance against the others. You’d think the writer ought to spice up their female lead to avoid the case of Double D (dead & dull), but they didn’t, sadly.

Someone please reassure me that she has improved in recent projects.

So not as a surprise, I didn’t care for her and Sano’s nonexistent romance. In one particular scene when they were giving each other the supposed “electric flirty” eyes in front of the class, I mentally checked out briefly because it didn’t make sense with their turtle-paced development. Her constant worries about him quickly became irritating and provoked eye rolls from me. She transforms into a naggy girlfriend who wants to interfere with every aspect of his life.

One episode in and I was asking myself, “Who is this kid?” because he brings light and fun into every scene. Toma played this role, a confused and hormonal teenager, to perfection. I couldn’t imagine Hana Kimi without Nakatsu; that’s how crucial his role is. I went in as a fan of Shun and Maki, but flew out a big fan of his. Frankly, he’s not that handsome or pretty, so looks clearly isn’t the hook element here. (I was paying attention to…um.. Hiro!) What I liked most about his performance is he didn’t try to be cute. His smooth actions, goofy expressions worked well together and in sync with his outrageous thoughts. He didn’t mean for them to be cute but we interpreted them as so because the intention behind is sweet and adorable. (Accepting his homosexuality, imagining a child with two fathers, trying to solve the said dilemma.) I died several times and killed my rewind button. All his monologues crack me up. The best ones CANNOT BE DESCRIBED IN WORDS! See them below in actions.

My only gripe with Nakatsu lies in the writing. Isn’t he a passionate soccer player? For the life of me, I couldn’t recall a scene where he actually kicks a ball!

His romance with Mizuki: To be honest, the romance between them is generated mostly because of Nakatsu’s crazy imaginations and devotion. Mizuki does not give him even a glance. There was this moment where the writer could’ve incorporated and built on their friendship – that scene where she decided to leave in episode 7 like no one else mattered in her decision. He asked her to stay but she just stared blankly at him until Sano made his grand speech which convinced her to stay instantly. You know what? Her bland self can go marry Sano for all I care. There, I said it! I was rooting for Nakatsu and the girl from the high school across from theirs. If memory serves me right, her name’s Komari. She is as cute as a button!

That was the worst dance ever in the history of high school dances. Nakatsu is a tree, while Mizuki is a log. While still stiff, the tree still has burning desires to love and conquer, but a log is just…. lifeless. I still remember how she neglected him right after the dance to go and violate Sano’s history with his dad. 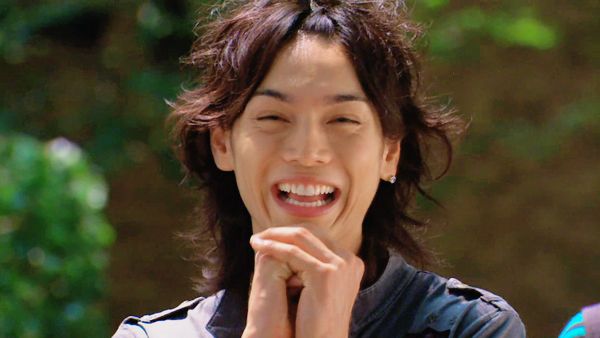 Hiro, this man is so pretty. His most attractive feature to me, strangely, is the button-like pinch on his chin. It gives his pretty face a unique edge, singling him out from the slew of other boys. But boy does need to eat. Actually, they ALL need to eat. Since I know Annette love Hiro, some screencaps of him for her: Click. Click. Click. Click. 😉

I really loved the chemistry between Nanba and Nakao, and the forbidden love the latter often shows despite the former’s dismay. I appreciated that however biased Nakao is towards Nanba, he isn’t afraid to let him know if he’s misled. There’s this beautiful scene in episode 5 where Nakao posed a big question, “Her happiness or your own happiness…Which one will you pick?” It’s such an important question for youths since they’re mostly about themselves. And I was glad Nanba displays more maturity than we gave him credit for. Choosing to congratulate his ex-girlfriend allows character growth, in that wishing her happiness, he’s become the bigger person.

The actor who played Tennoji looks muscular but still manages to exude a favorable amount of likability. Favorite moment is when he consciously squeezes his chest, powers up his arms, and yells, “BABY!” And that classic adorable scene of him holding an elderly woman’s hand and taking her to the beach-flirting contest. If Nakatsu is an energetic ball of hormones, then Oscar is the resilient human form of Over-the-top. And kudos to the actor because he played Oscar unabashedly without holding back. A shy actor wouldn’t have made this role look effortless.

Dude, I think Yusuke is stalking me! Or maybe it’s the other way around, almost all Jdramas that I have watched, he took part in. In here, he’s known as the Ghost Boy, another oddball, in charge of detecting aura around the school. I wasn’t surprised to find out he knew Mizuki is a girl. Probably the smartest character of them all.

Oh lordy, I hate goodbyes from now on. Seriously, after the third set of students, I was ready to let her GO! Nakatsu’s short speech kept me attached. Once again, Toma proved that he can do both wacky and emotional. Just look at the way his eyes droop down ever so sadly and those bright eyes of his brimming with tears. *Heartbreak* Nakatsu, along with the 3 dorm leaders, is a joy to watch.

Heck to the YEAH! “BABY!” Although there are holes in the friendship card between Nakatsu and Sano, the overall bond shared between the supporting cast is strong and palpable. I loved these shameless kids. They’re the real scene stealers and every episode is a riot. True to its simplistic storytelling, the angst was kept at bay, not exaggerated or overplayed. Watch if you want to see actors carry out outrageous expressions and idiotic actions. The pure reason why it’s enjoyable is because it’s ridiculous. Don’t try to understand why they do what they do. Embrace it and you’ll be entertained.

“High School – You hate it while you’re at it, but in the end – you wish you caught every moment on camera.” Nostalgia hits me. *right here*