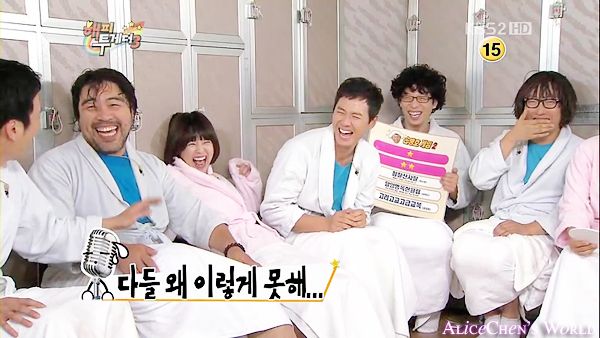 What a winsome episode! 3 Reasons: 1) I love the drama 2) I love the cast 3) Their offscreen chemistry radiates through the screen. If I were to tell you these actors are starring in a dark, morbid drama, would you believe it? No. They’re just so happy and smiley, you can’t help but be infected with their cheerful disposition.

Thanks KBS for branching out of their station and inviting cast from other stations, in this case, Cable! Please have Flower Boys Ramen Shop too? I need some Lee Ki Woo. This instant!

My impression of Lee Won Jong changed dramatically after this show. I feel embarrassed for calling him “Pig” when he was a nasty villain in Warrior Baek Dong Soo. In reality, he’s such a cute ajusshi. Me thinks he has an infectious laughter, coupled with a laid-back personality.

There’s also Jang Hyun Sung who plays a quiet, stern Chief Prosecutor, which is like…the opposite of himself. He’s so awkward. The funny, easygoing type.

And then there’s the maknae of the bunch – Lee Young Ah. I love how the guys clearly love her as an energy booster and a badass sister. The catch is she doesn’t need their protection. She’s a tough cookie, raising a small shark in her house. While her chemistry with Yeon Jung Hoon is intense on set, he only has eyes for his wife, Han Ga In. Such a charmer, this dude. We share the same birth date!

Ha! Count it on Yoo Jae Suk to ask every actress to show off their wave. Lee Young Ah adorably swings her hips left and right, generating booming laughter from her co-stars, or should I say brothers/oppas? They ADORE her. Just look at Yeon Jung Hoon’s I-can’t-stand-her-cuteness face. xD

Of course, we can’t let Jung Hoon go without a dance from him. I like how he kind of gives Young Ah the I’m-doomed look! He has rhythm! But it is too short. MOAR!!

– And here’s our group of Prosecutors and Detective….gulping down yogurt drinks. Without a care at the MCs. hahaha. Why are they so cute? I don’t think you guys can read my added caption. Click the image!

I’m enjoying this series. It satisfies the little detective in me with character-based cases. Give it a try if you haven’t!